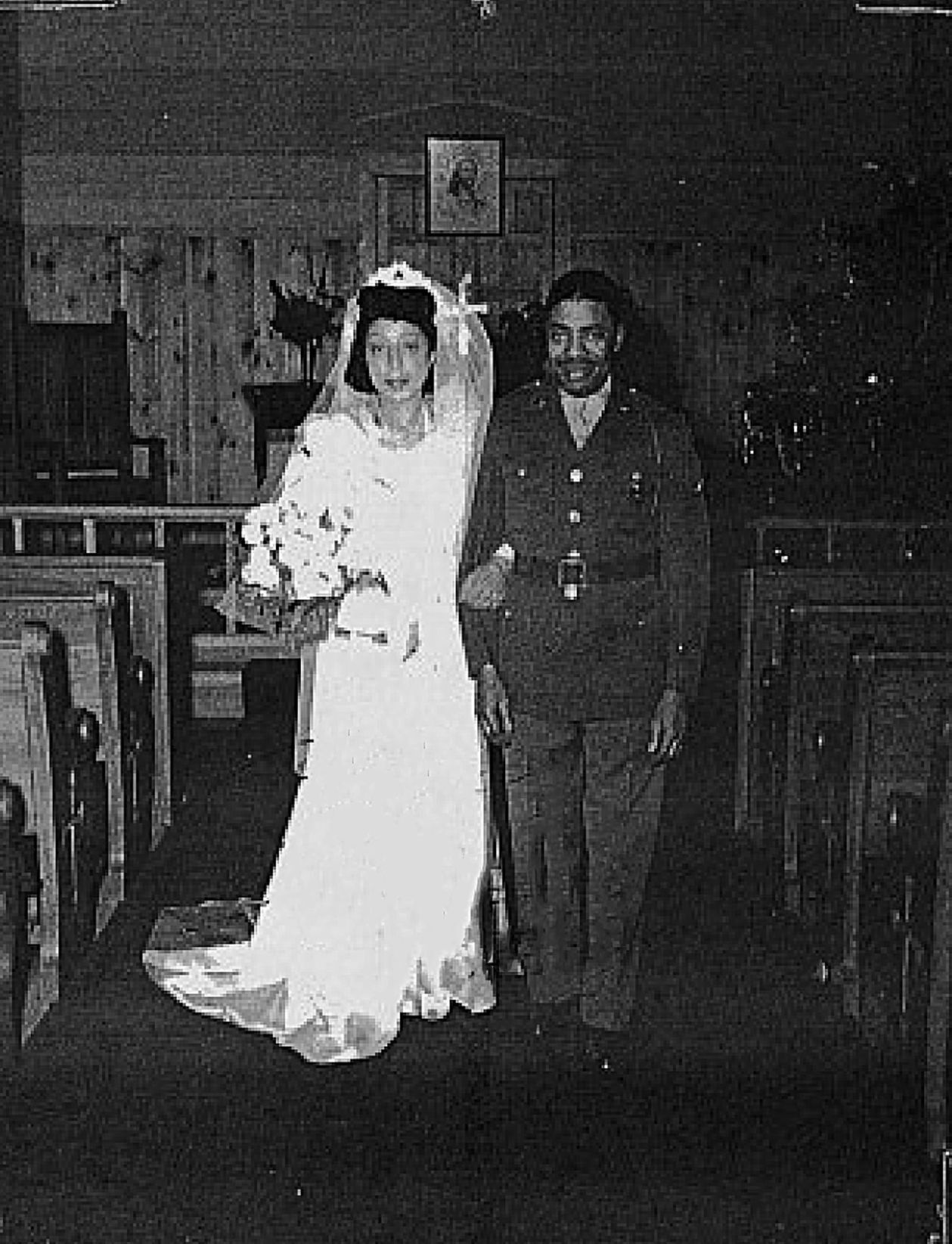 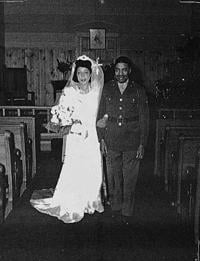 An unidentified couple poses in the non-denominational chapel at Grenier Field during World War II. 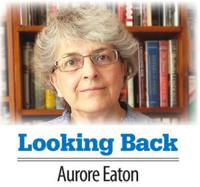 DURING WORLD WAR II Grenier Field in Manchester was a busy stopover facility for military aircraft bound for Europe, and it provided training for an estimated 50,000 airmen. During the course of the war the population of the base reached up to 6,000 servicemen.

Many of the support functions at the base were carried out by African Americans. The first group of Black servicemen came to Grenier Field in December 1941, and in 1942 and afterward hundreds more arrived. The Army was segregated, so these men were billeted in an area that was separate from the barracks for the White soldiers.

As Manchester’s Black population had been nearly nonexistent before the war, the sudden presence of Black soldiers in the city caused discomfort for some local citizens. This was not an era where there was an easy mixing of races in any part of the country—so, even in the northeast, racial prejudice was a reality.

One incident that took place in 1944 is indicative that, even this late in the war, racial tensions existed in the city. The story was told by Bertha Barwikowski in an interview she gave in 2000 for the Women Veterans Historical Project. Bertha had served in the Women’s Army Corps as a clerical worker at Grenier Field. She recalled, “I did have one experience that I had forgotten about. [Our officer] would want something in a hurry that they might not have on the base, and they sent us downtown, like to a stationery store, or whatever you had to go to. Motor pool was sent to go over with you.”

The driver was a Black man, but this didn’t bother Bertha, “I didn’t think anything of it...The Jeep comes up, and I jump in the front seat with him, and we went downtown. We’re walking along, we’re talking, and he had a knapsack with him to carry some stuff…We went into the store. We ordered all the stuff, and they got it all together, put it up. They were used to seeing GIs come in and buying.”

She continued, “We get back, and we’re laughing and talking, got in the Jeep. He jumps in, and I jump in, and we’re going back. We were sent out on a mission. I get back, and the [officer] calls me in the office. He’s from Virginia. He said, ‘Did you walk in town with that n-----?’ I said, ‘Beg your pardon?’” He asked the question again, and Bertha answered, “I walked alongside of the man you sent me with.” The officer responded, “We’ve had three phone calls that one of our girls is fraternizing with a Black man.”

Bertha, who had attended integrated schools in her hometown of Stamford, Connecticut, was shocked by this reaction.

The next time Bertha was ordered to go into the city to run errands, the officer told her “I’m sending you down with the same fellow again. But, please, sit in the back of the Jeep, not up front with him.” She asked, “Is that a direct order?” and he responded, “Yes, it is.” She told the driver what had happened, and he said, “Yeah, I heard all about that stuff.” Bertha ended the story with, “But you see, there was segregation then. They had their own barracks. I never even saw where they lived. I had no idea where they were on the base. We just didn’t go there…”

A report produced in 1946 by the local staff of the USO (United Service Organizations) outlined the programs provided to bolster the morale of the Black soldiers. In regard to the situation with Blacks interacting with the local population and businesses, it included a carefully worded summary, “Insofar as acceptance of the Negro Troops and their families by the city of Manchester, public relations were good…Credit was extended in the downtown stores. Freedom of admittance to public places prevailed…Manchester outwardly seemed to accept the presence of Negroes as a normal influx after the awareness of their presence wore off. Many of the families have formed friendships. Men and their wives who live off the base are integrated into the same neighborhoods and the same apartment houses and hotels.”