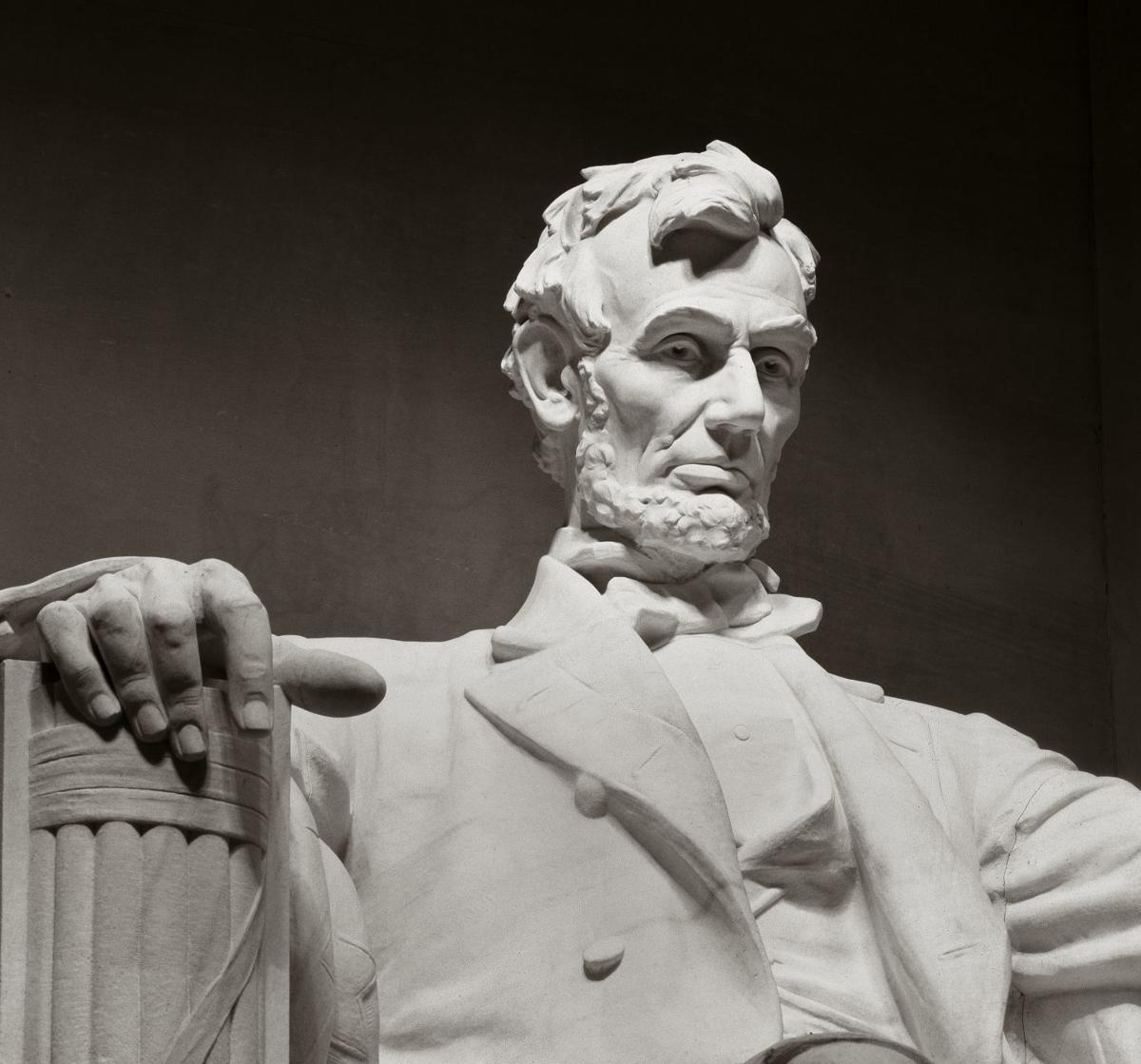 On Memorial Day, May 30, 1922 the Lincoln Memorial was dedicated in Washington, D.C. Seated in places of honor were 72-year-old sculptor Daniel Chester French and his friend, 57-year-old architect Henry Bacon. The two men collaborated with each other on numerous public monument projects in the course of their careers, but none would compare to their inspired effort to create a permanent national monument to Abraham Lincoln, the 16th President.

Construction on Bacon’s classic white marble Greek Revival building had begun in 1914. It stands today at approximately 190 feet wide by 119 feet deep, and 99 feet tall. The structure is surrounded by 36 columns, each representing a state in the Union in 1865, the year Lincoln was assassinated. Inscribed on one wall in the central chamber are the immortal words of Lincoln’s Emancipation Proclamation (1863), and on the opposite wall, his stirring Second Inaugural Address (1865).

The large central chamber of the structure proved to be a fitting home for French’s striking sculptural portrait of President Lincoln. The dramatic figure sits in a massive square chair draped with cloth. He appears to be deep in thought, with his eyes gazing into the distance, yet his taut posture suggests that he is on the verge of standing up, perhaps to proclaim some great truth.

The work to create the 19-foot statue of Lincoln that French had designed was begun in late 1918 in a workshop in New York City, and was finished about a year later. The artisans of Piccarilli Brothers carved the statue out of 28 enormous blocks of white marble from Georgia. The pieces had never been assembled before being shipped to Washington. Putting the statue together was an incredible technical feat. It was installed atop a base made of Tennessee marble. Then these words, composed by art historian Royal Cortissoz, were carved in the wall above Lincoln’s head: “In this temple, as in the hearts of the people for whom he saved the Union, the memory of Abraham Lincoln is enshrined forever.”

Although the statue was essentially completed by the end of May 1920, it would take two more years to put the final touches on the building’s decorations and to organize the grand dedication event. In the meantime, photographs of French’s masterpiece were widely circulated in the press, and critics and the public reacted with near universal praise.

Over 50,000 people attended the Lincoln Memorial dedication event. As the head of the monument committee from its formation in 1911, former President William H. Taft, who was then Chief Justice of the U.S. Supreme Court, presided over the ceremony. He turned the new national treasure over to President Warren G. Harding, who accepted it on behalf of the American people. Lincoln’s only surviving child, 78-year-old Robert Todd Lincoln, was among the dignitaries present.

In the 1920s racial tensions in the U.S. were high, and evidence could frequently be found on the pages of newspapers. An article published in a Minnesota paper on May 28, 1922 detailed the events occurring that day in Washington, and included a photograph of the magnificent Lincoln statue. This celebratory piece appeared next to a news story from Waco, Texas, with the shocking headline, “Mob Smashes Negro Hearse in Texas Riot – Coffin for Lynched Black is Wrecked after Burning of Body.”

Although some in the press called the Lincoln Memorial a “magnificent temple to the Great Emancipator,” the great irony of the situation was that seating at the dedication ceremony was segregated, with blacks relegated to a separate section in the stands. The event’s program included one black speaker, Robert Russa Moton, principal of the Tuskegee Institute, a college for blacks in Alabama. He was forced to edit the original version of his speech about the general lack of progress in race relations since the Civil War in order to tone down his rhetoric. He still managed to make his point, but the press barely paid attention.

From that day in 1922, the Lincoln Memorial, with Daniel Chester French’s extraordinary portrayal of Abraham Lincoln, has played an essential, though often complicated, role in the hearts and minds of Americans.

Correction to last week’s column: Chesterwood, Daniel Chester French’s estate is in Stockbridge, Mass., and not in Sturbridge.

Next week: An interview with Harold Holzer, Lincoln scholar and biographer of Daniel Chester French.