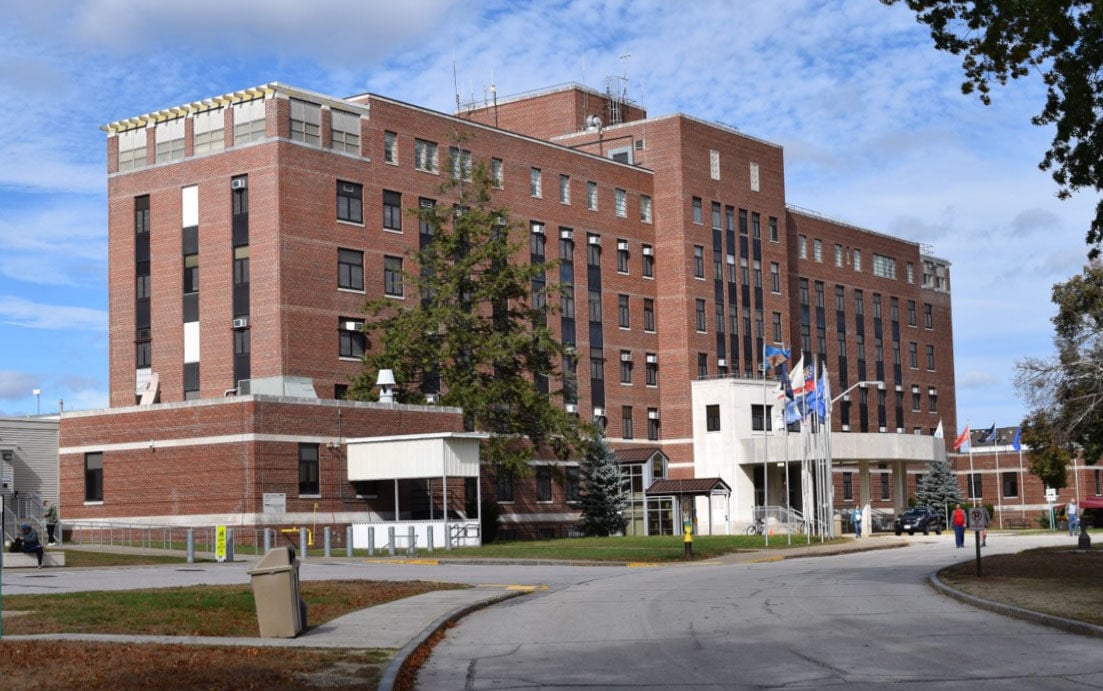 During the COVID-19 pandemic, many patients use the Manchester VA’s video-conference system to talk to their doctors and other care providers.

The approximately 30-acre site for the new Veterans Administration Hospital in Manchester was made up of 11 acres known as Smyth Tower Park that included a quaint stone tower built in 1888 by former Governor Frederick Smyth; an adjoining parcel that had been owned by the estate of Marion Smyth, Governor Smyth’s widow; and a contiguous tract of land that had been owned by local poultry farmer Henry A. Fiske. When the VA acquired these properties to prepare for the construction project set to begin in 1948, this area in the northeast section of the city was largely undeveloped.

The centerpiece of the $5,000,000 project would be a spacious 150-bed, fully-equipped, modern hospital building. The VA awarded the design and engineering contract to James H. Ritchie and Associates of Boston. The firm had been founded by James H. Ritchie (1876-1964), a Scottish immigrant who had come to the United States with his family as a small child. It is uncertain where he received his education, or how his early career was launched, but he had established his architectural practice in Boston by around 1908. For several years he lived in Newton, a suburb of Boston, where he designed several local buildings, including a courthouse, police station, church, school and library.

Ritchie expanded his office and began specializing in large institutional projects. He and his associates worked in a variety of architectural styles – Georgian, Renaissance, Italian Renaissance, and Gothic Revival, as well as Art Deco. From 1911 to 1922 Ritchie designed five buildings for the Massachusetts Agricultural College (now the University of Massachusetts at Amherst), including Memorial Hall and Grinnell Arena. In 1924 he and his firm designed a handsome headquarters building for the Boston Police Department in the Back Bay, which is now a luxury hotel. From the late 1920s into the 1930s, Ritchie’s office designed several buildings for the Boston Sanatorium hospital complex in the city’s Mattapan neighborhood. This was the largest tuberculosis hospital in Massachusetts, and considered a progressive health care institution.

Ritchie was still actively involved in his firm when the Manchester VA Hospital project was undertaken, and among the architects working with him was his son Donald Ritchie (1912-1996). Personnel from the U.S. Army Corps of Engineers, New England Division, were part of the design team. Their job was to assure that the plans and specifications for the hospital met the exacting standards established by the VA. The modern brick building was designed in an updated, stream-lined version of the Prairie Style. The style originated in the Chicago area in the early 20th century, and is closely associated with architect Frank Lloyd Wright, one of its most successful proponents. The hospital building would incorporate typical Prairie Style elements, including decorative horizontal banding and neat rows of uniform windows.

The hospital structure would be 350 feet wide and six stories high, plus a basement level. It would have a prominent center block that would rise one floor higher than the rest of the building. This extra floor would house a “fan room” for ventilation and other mechanical equipment. The far ends of the top floors of the right and left blocks would feature roof gardens. These outdoor spaces would make fresh air and sunshine available to the recuperating veterans. To create a safe and pleasant environment, the “window openings” would be covered in security screens, and the “ceilings” would consist of steel lattice framework, providing some shade while being open to the sky.

The building would include a front lobby and reception area; kitchen and dining facilities; and a chapel with a moveable altar that could be pushed in or pulled out to suit different types of religious services. The operating room would have walls made of tinted structural glass.

The general contractor for the project was George A. Fuller Company of Boston. The Army Corps of Engineers sent Robert Chapin to serve as the resident engineer. He oversaw the project from his office in the Smyth Tower, which was perfectly located on a knoll in the center of all the activity. The groundbreaking took place on July 1, 1948, with no fanfare. Next, there would be tons of heavy boulders and ledge to excavate.

Next week: Not just a hospital building — but an entire campus!