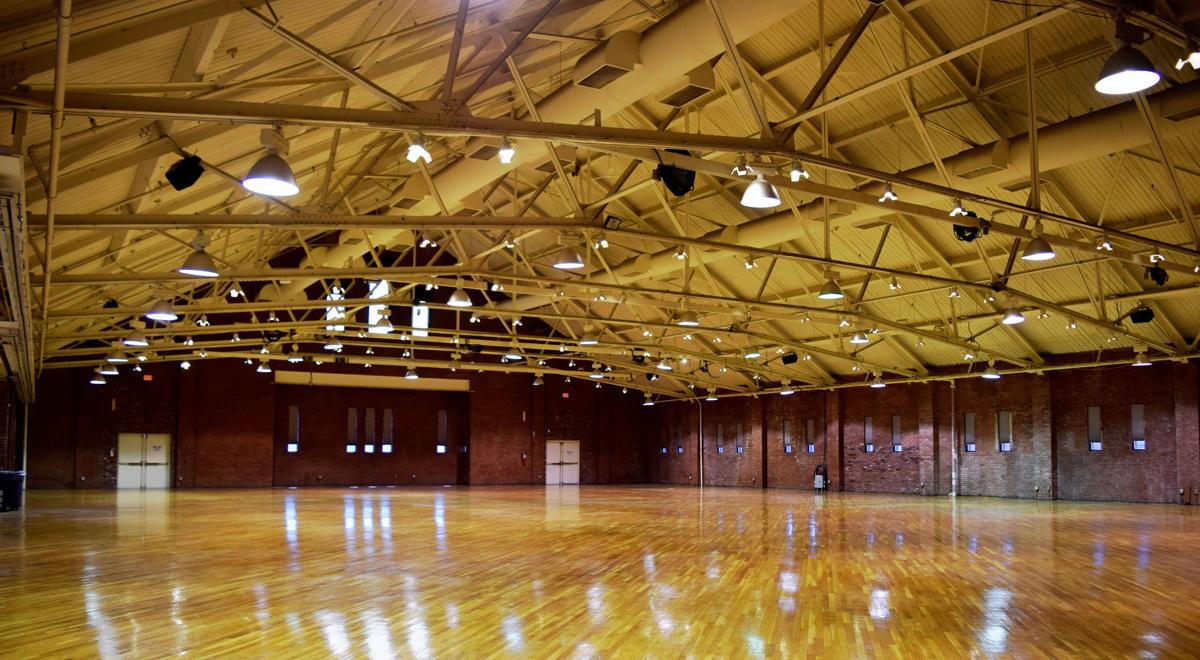 Courtesy of the DoubleTree by Hilton Hotel A recent photograph of the former drill hall of the Old Armory Building on Pleasant Street in Manchester which was used by the USO during World War II for athletic and social activities.

Editor’s note: An incorrect version of Looking Back was published last week. This week’s column continues where the series left off on Sept. 21.

Before and during World War II the U.S. War Department sought to encourage good relations with the civilian populations that interacted with its military facilities. One of the ways it did this was by naming new bases in honor of revered figures from the local communities whose lives represented the highest of American ideals. When asked for recommendations for naming the city’s new Army airfield, the Manchester Board of Mayor and Aldermen submitted a short list of notables for consideration. This included the late Army pilot Jean Donat Grenier.

Grenier had been born in Manchester in 1909. His French-Canadian family had attended Ste. Marie Church, and he had received his early education in the parish’s Hevey School. He had graduated from Manchester High School West and the University of New Hampshire. In 1933 he had been commissioned as a 2nd Lieutenant in the U.S. Army Air Corps at Kelly Field in San Antonio, Texas. Grenier died on Feb. 16, 1934 in Oakley, Utah, when his plane crashed on a flight for the Air Corps Mail Service. In a ceremony held on Sunday, Feb. 22, 1942, the Manchester airbase was formally named Grenier Field. This gesture of recognition of a young airman who had died in service to his country was greatly appreciated.

After World War II began in December 1941, Grenier Field kicked into high gear, and became an important component of the overall American defense effort. The base served as a stopover for warplanes headed for Europe, and as a recruitment and training center. With over 2,000 troops stationed in Manchester, the USO (United Service Organizations) programs in the city were vital in maintaining good morale.

The USO Club on Pleasant Street, which opened on Jan. 24, 1941, was one of the finest such clubs in New England. It was known as the “Men’s Center” because it focused on providing off-duty entertainment and assistance to servicemen. (This series will include the story of another USO program in Manchester, the “Women’s Center,” in future columns.)

An army of hostesses, junior hostesses, committee members, and other volunteers materialized soon after the USO Club officially opened on January 24, 1941. The club, housed in a huge remodeled armory building, offered athletic and social amenities in the subdivided former drill hall. The building also included lounges, reading rooms, a photography lab, hobby shops, and dorm rooms. The USO Club hosted informal dances, concerts, and talent shows on some weeknights, and formal dances nearly every Saturday. On Sunday evenings, citizens brought in baked goods and other home-cooked foods and set up a grand buffet for the servicemen.

The 28-piece Grenier Field Army Air Force Band played at many of the USO Club dances. Its repertoire included popular music of the day and old-time favorites played in “swing” arrangements. Also, its members played as quartets and in other combinations, including the “Jive Bombers,” and even provided music for square dances. Local bands also performed at USO Club events, including the Za Za Ludwig and Maurice Therrien orchestras.

The USO provided the Manchester population with a fun social outlet during a stressful time. Manchester families warmly welcomed the Grenier “boys” they met through the USO into their homes, and they became like second families to them. The USO’s Wives Club provided activities for the spouses of the servicemen, including socials and birthday parties. The inter-squadron sporting events were very popular, especially basketball. The Grenier Field teams were cheered on by enthusiastic crowds.

USO Club events were well-organized and, by design, offered few opportunities for young people to get into trouble. One example was an outing held in July 1942 at Crystal Lake in Manchester. According to the “Club Notes” column in the Manchester Union newspaper, the event would be held “under the supervision of Mrs. Nancy Hoyt, chairman of the Senior Hostesses Committee. She will be assisted by Miss Mary Greene, and members of the hostesses group. Capt. Walter Pulsifer, Special Service Officer attached at Grenier Field, will be in charge of the 80 men invited to attend. Forty girls from the Junior Hostesses group will help entertain the boys. The program will include group games, group singing, and swimming. Box lunches will be furnished by the hostesses.”

Next Week: More on the Manchester USO Club.