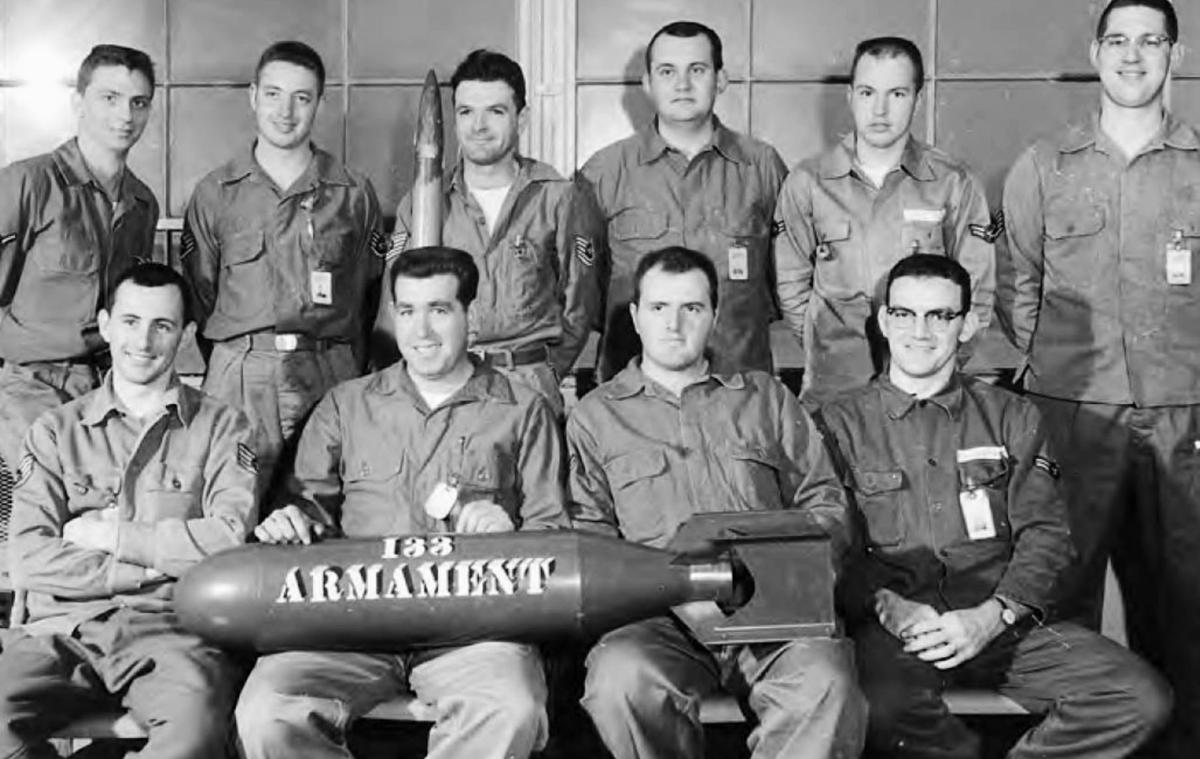 Members of the 133rd Fighter Group’s armament team at Grenier Air Force Base, 1950.

WITH THE OUTBREAK of the Korean War on June 25, 1950, the federal government’s plan to transfer the assets of Grenier Air Force Base to the City of Manchester were scuttled. Grenier was no longer a surplus military property, as it needed to be reestablished as an active military facility. Even if Grenier had been turned over to the city, it would have remained home to the New Hampshire Air National Guard (NHANG) and its 133rd Fighter Squadron. The Air National Guard system was a key factor in the country’s push to rapidly increase its air power capabilities at the beginning of the war.

On Feb. 1, 1951, the NHANG’s 133rd Fighter Interceptor Squadron (as the unit was redesignated) was activated for Korean War service as part of the U.S. Air Force. At the time, the 133rd included 391 officers and airmen, equipped with F-47D (also known as P-47D) Thunderbolt fighter planes. During the course of the war, many of the 133rd’s officers and airmen would serve overseas in other units and flying other types of aircraft, with some engaging in combat in Korea. The remaining personnel and the unit’s aircraft continued to be based at Grenier, where the squadron focused on gunnery practice missions. The 133rd was also tasked with training Air Force recruits who were sent to Manchester from the indoctrination center at Lackland Air Force Base in San Antonio, Texas. The 133rd would remain under federal control until Nov. 1, 1952 when it would be returned to state command.

In February 1951 a bit of light-hearted news about Grenier AFB was picked up by the Associated Press and published in newspapers across the country. A typical headline, published in the Pittsburgh (Pa.) Post Gazette on Feb. 24, read, “Slip-up Sends WAF to All-Male Base.” The story was about 20-year-old Private First Class Stella Banouveris, a recruit in the Women in the Air Force (WAF) program from Racine, Wisc. She had been transferred from Mitchel Air Force Base on Long Island, N.Y., and had arrived at Grenier on Valentine’s Day, Feb. 14. She had been surprised to discover that she was the only female service person among 600 airmen.

According to the article, “The first hint the base had was when she showed up for work with the other radio mechanics. She had 14 months radio training and soon showed she could tackle a repair job with the best of them. When she showed up in the mess hall, there was a swelling murmur: ‘Gee, a woman in the chow line!’” Grenier’s commanding officer, Lt. Col. Lauren A. Howard of the 133rd Fighter Squadron, reportedly was “shaken out of his customary serenity when Stella reported for duty.” She was at Grenier for only 10 days before being transferred to Otis Air Force Base on Cape Cod, Mass., where she joined a contingent of other WAFs.

In the spring of 1951 the 101st Fighter-Interceptor Wing, a federalized National Guard unit, was transferred from Dow Air Force Base in Bangor, Maine, to Grenier. This was a sizeable group, made up of several squadrons. Portions of the Wing were dispersed to other bases, and by early February 1952 the entire Wing had been deactivated.

During the Korean War, Grenier AFB assisted the Air Force in other ways, including providing stopover support for squadrons traveling from one base to another. Also, Grenier played a major role in facilitating trainings for Air National Guard units in the region. For example, it was one of three airbases that hosted a two-week intensive field training exercise for numerous northeastern Air National Guard squadrons that began on July 28, 1951. The other encampment sites were Dover Air Force Base in Dover, Del., and McGuire Air Force Base (Fort Dix) in Burlington Country, N.J. Grenier hosted 17 squadrons, 12 of which were components of the 102nd Fighter Wing of the Air National Guard based in Boston. Two other squadrons participating were also headquartered in Boston, while one was from Rhode Island, and two were from Westfield and one from Worcester, Mass. For off-duty entertainment for the participants, the Guard sent the 567th U.S. Air Force Band, known as the “Air National Guard Band of the Northeast,” another Boston-based unit.

Aurore Eaton is a historian and writer in Mancheste; contact her at auroreeaton@aol.com or at www.facebook.com/AuroreEatonWriter.