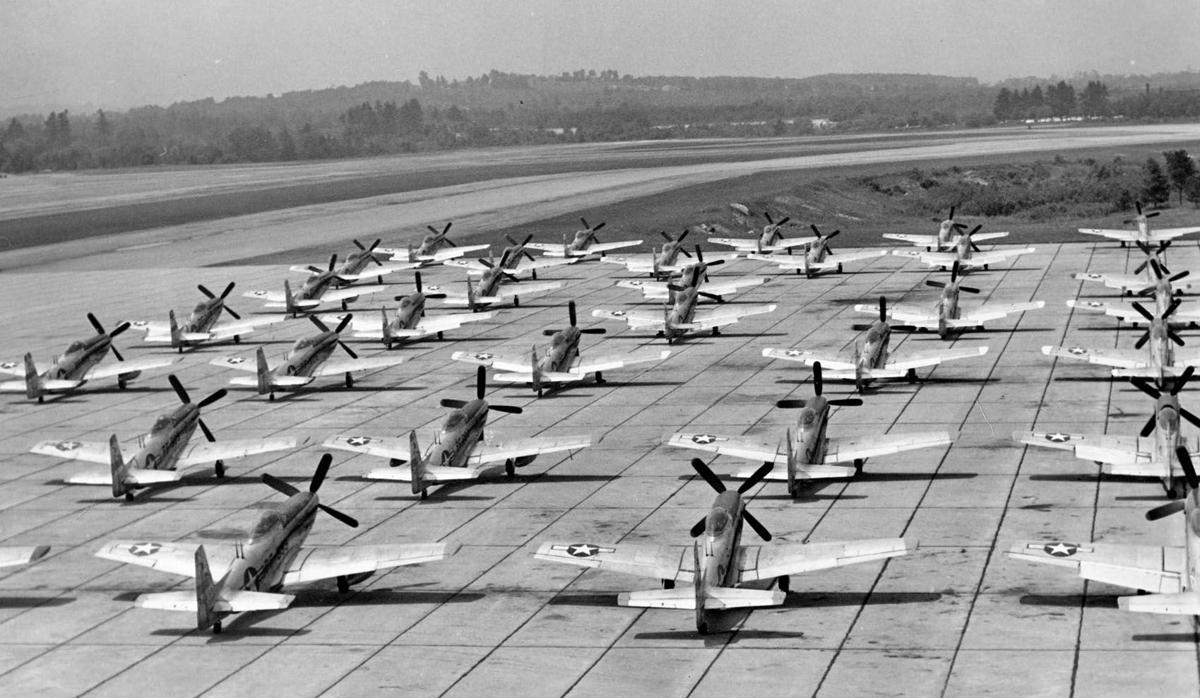 AFTER WORLD WAR II ended in 1945, the U.S. government began to assess the size, capabilities, and goals of all types of military facilities across the country. Many American air bases, including Grenier Field in Manchester, were required to drastically scale back operations. By November 1946 the base was on stand-by status with most of its functions mothballed. For the next several months Grenier’s staff was made up of only 16 officers, around 100 enlisted men and 67 civilians.

In 1947 two things happened that enabled the base to spring back to life. The first story begins in January 1946 when the 529th squadron, a fighter bomber unit that had served in India and China during the war, was deactivated. In May 1946 the squadron’s designation was allocated to the New Hampshire Air National Guard, which was in the early stages of development. The 529th was renamed the 133rd Fighter Squadron, and plans were made for it to be stationed at the newly built State Military Reservation at Grenier Field. Its mission would be to provide front line air defense.

To be able to operate, the 133rd needed to be recognized by the federal National Guard Board. This would happen as soon as staffing reached 25% of the authorized roll of 50 officers, and 10% of the authorized 303 enlisted men. When these levels were achieved in April 1947, the unit was activated. Air crew training was begun as recruitment efforts to fill the ranks continued. At the end of May the squadron began receiving an impressive inventory of surplus warplanes. This would eventually include 28 P-47D (also known as F-47D) Thunderbolt fighters, four Douglas B-26 bombers, four AT-6A trainers, two L-5 Sentinel observation planes and two C-47A Skytrain transports.

In addition to the establishment of the new Air National Guard unit, a second factor led to the revitalization of Grenier Field in 1947. This was the Army Air Forces decision that Grenier become home to the 82nd Fighter Group. This new unit was assigned to the Strategic Air Command (SAC). It was made up of three squadrons consisting of around 25 P-51 Mustang fighter planes each. The first of these squadrons to arrive at Grenier landed at noon on April 17, 1947.

On May 8, 1947, Grenier Field was given its official mission which was to “Man, train and equip such units in accordance with instructions and priorities to permit long range fighter escort operation in any part of the world, independently or with naval and land forces.” Grenier was soon bustling with new units organized to support the 82nd, including the 347th Air Service Squadron, the 372nd Air Engineering Squadron, the 501st Air Material Squadron of the 347th Air Service Group, a medical squadron, a military police squadron and a motor pool.

With so many units starting from scratch, the organizational situation at Grenier in 1947 was a bit chaotic. A writer for the base newspaper, The Northern Sentinel, recalled this period in a 1949 article: “A typical illustration of the lack of key personnel was presented by Lt. Stephen E. Defan who held the key titles of Provost Marshal, Claims Officer, Legal Officer, Trial Judge Advocate for Special Courts Martial and was, in addition, the recorder of two other boards.”

Manchester’s civic and business leaders and its ordinary citizens were thrilled to see the rapid evolution of their beloved airfield. They were proud that Manchester was continuing to play an important role in the overall military defense of the country, and were pleased that the renewed activity at Grenier would have a positive economic impact on the community.

In late June 1947 a dance reception was held to welcome the Grenier Field servicemen to Manchester. It took place at the Henry J. Sweeney American Legion Post #2 hall which was located on Concord Street in the downtown. Mayor Josaphat T. Benoit delivered the opening remarks, and more than 2,000 people attended. Not only was this an enjoyable social event, but it also served another purpose — as a recruitment effort. Young men from Manchester and vicinity were invited to attend the dance, and then to come over to the base to learn about enlistment opportunities.