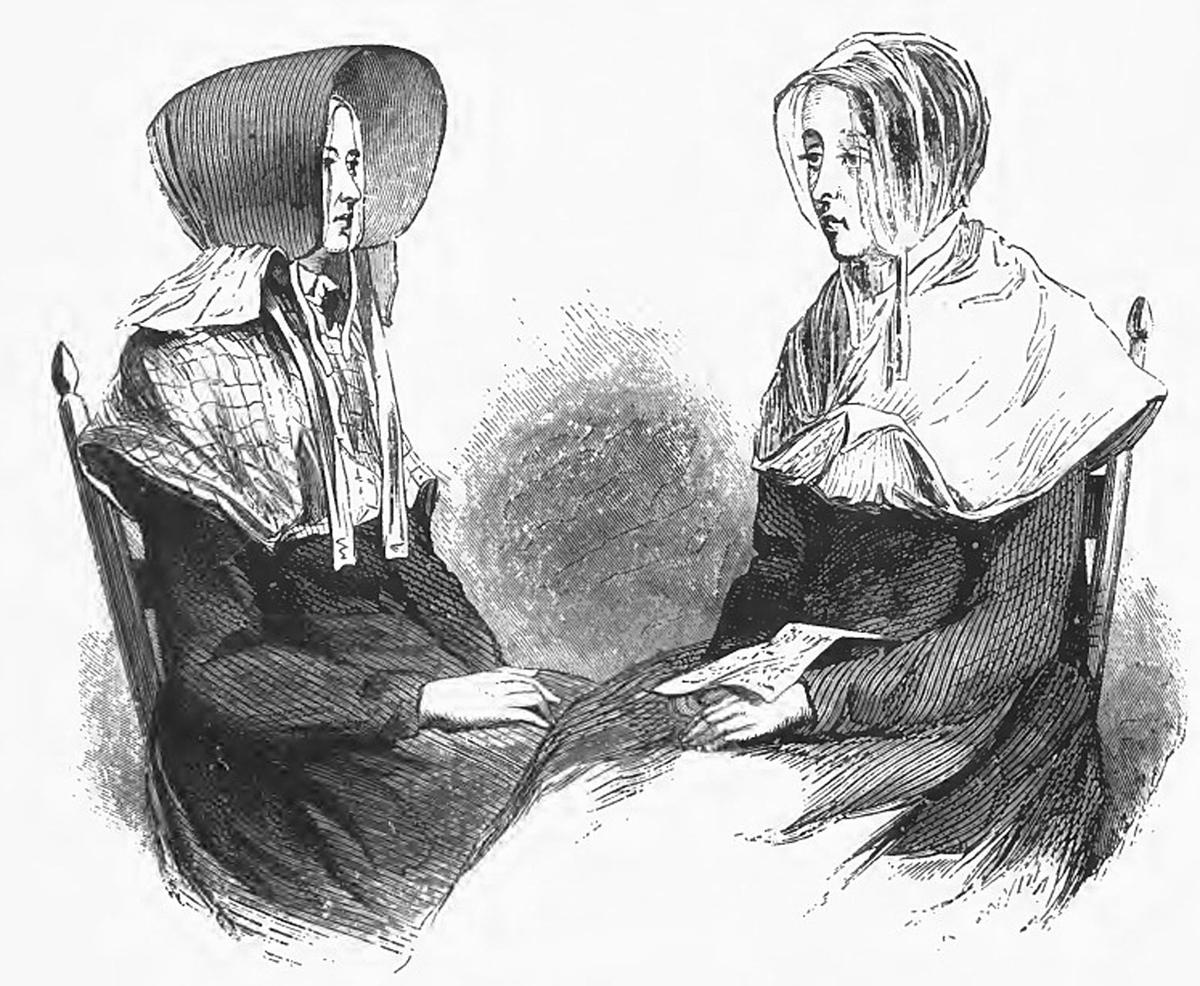 Nineteenth-century Shaker women in typical dress. Mary Dyer would have dressed in a similar fashion.

By early 1815 Mary Dyer had been living for nearly two years as a novice in the Enfield Shaker community. She had been satisfied with her early experiences there, but gradually she had begun to chafe at the strictures of communal living and at the Shaker religion itself, which allowed for no disagreement. The people who found peace and fulfillment as Shakers were seeking an orderly way of life that provided them with a sense of shared purpose, and a religious purity that kept them safe from a perilous world. Joseph Dyer was inspired by the Shakers, and he was warmed by their kindness toward him, but Mary could find no peace among them.

In late January 1815, the day after Mary witnessed her 5-year-old son, Joseph Jr., being harshly treated by a Shaker Eldress, she told the community’s leaders that she wished to leave. They tried to persuade her to remain, because, despite her independent nature, they felt she had the potential to become a good Shaker sister. They finally agreed that Mary could depart if she wrote a letter to someone outside the Shaker society who would agree to take her away.

Mary then spoke with Joseph, and he concurred that it would be best if she left the Shakers. However, when Mary reminded him of their verbal agreement of 1813 that she would be free to take some of their five children with her if she did not choose to stay with the Shakers, Joseph informed her that this would not be possible, as he would not allow it, because he and Mary had legally indentured the children to the Shakers. Mary was shocked, as she apparently had not clearly understood the full nature of this arrangement.

The next day was a Sunday. While most of the Shakers were attending the worship service, Mary stayed in the dwelling house. She knew that Joseph Jr. was in the building, but a Shaker girl followed her around to prevent her from seeing the little boy. Mary reminded the girl that she should be preparing food for the residents to eat after the service. After the girl left, Mary looked out the window and saw that a horse-drawn sleigh with a driver and two passengers was passing on the snowy road near the building. She ran outside and asked the driver if he would take her letter for her, and then told him that she was leaving the Shakers. She then suddenly asked if he could take her, too.

He agreed, and a drama began to unfold. Mary ran back into the dwelling and found her boy being supervised by an elderly Shaker man. She told him that the sleigh driver was going to take her letter, and asked if he could be so kind as to get some cider for him. When the man left the room and headed for the cellar for the cider, Mary took Joseph Jr. and the two of them ran to the sleigh. The driver, who already had two female passengers, took Mary and the boy to Hanover, about 8 miles away.

When Joseph learned of Mary’s escape, he left the prayer meeting and took off after her on horseback, followed by four Shakers in a sleigh. After arriving in Hanover, Mary asked to be brought to the home of a friend, John Williams, who was a relative of her husband. Unfortunately, she mistook another house for his. As she explained her desperate situation to the surprised occupants, Joseph arrived. Mary begged him to let her keep the child, who was now crying and screaming in fear and confusion. But Joseph tore the boy from her arms, carried him onto the horse, and returned with him to Enfield.

Mary, now thoroughly distraught, made her way to John Williams’ home. She stayed there for two months, where she made contact with associates of Williams who became sympathetic to her plight. She also spoke about her situation with congregants in the local churches, and she began to develop her story into a compelling narrative that would help her find support for the ordeals that awaited her.

Next week: Will the New Hampshire Legislature help Mary Dyer?

Aurore Eaton is a historian and writer in Manchester; contact her at auroreeaton@aol.com or at www.facebook.com/AuroreEatonWriter.