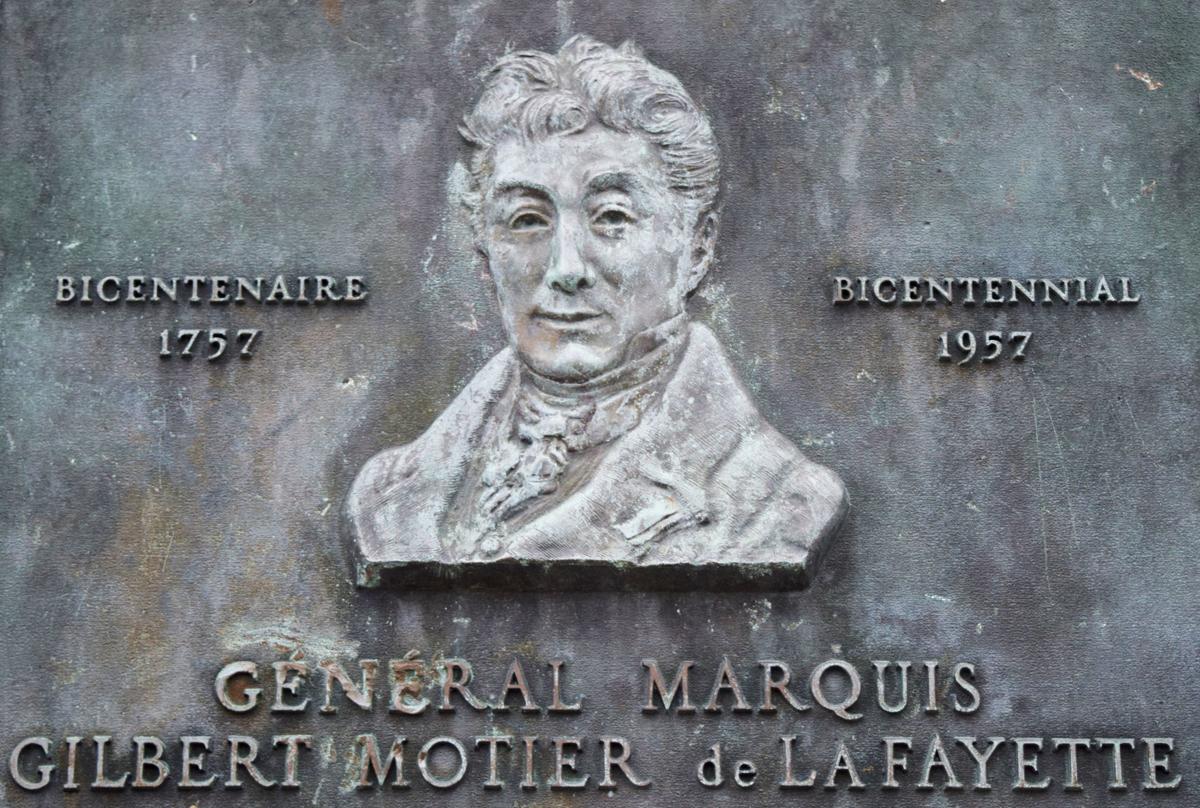 Detail of the plaque in Lafayette Park in Manchester dedicated on Nov. 11, 1957, in commemoration of the bicentennial of the birth of the Marquis de Lafayette in 1757.

The town of Dover had planned a marvelous series of events for the Marquis de Lafayette’s visit on June 23, 1825. All went well, and after an exhausting day Lafayette stayed overnight at the mansion of local merchant William Hale. At 8 a.m. the next morning, Lafayette’s barouche was escorted by several carriages filled with dignitaries to the Dover Manufacturing Company. When they arrived, the large gate of the cotton textile factory was flung open to reveal a double line of female workers —200 total— dressed in white with blue sashes. Newspapers later reported that “The General, on entering the Factory yard, was repeatedly cheered with the huzzas of hundreds from the tops of the buildings surrounding the factory yard…”

The factory was quiet for a few moments until “as if by magic, it was instantly in full operation, attended throughout by the girls who had received the company on entering the yard, each at her proper place, and busy in her proper employment.” After witnessing this extraordinary scene, Lafayette traveled to Maine where he visited Portland, then the state’s capital, and several other towns. He returned to New Hampshire on June 26, intending to traverse the state from east to west as rapidly as possible. He spent that night at Piper’s Tavern in Northwood, a place he had visited on June 23.

On June 27 Lafayette arrived in Concord for the second time, having spent an eventful day and evening there five days before. He stopped at the Phoenix Hotel on Main Street at around 9:30 a.m. where he was met by an enthusiastic crowd. After breakfast he, his son Georges Washington Lafayette, and his secretary August Levasseur were conducted to the Senate chamber in the New Hampshire State House. He was addressed by Matthew Harvey of Hopkinton, president of the Senate, who concluded with the words, “You are now about to leave us — and when you go, believe me, Sir, you will have the kindest wishes of the State of New Hampshire, for your future health and happiness.”

Afterward Lafayette was warmly received in the representatives chamber, and he also met with dignitaries in the Council chamber where Secretary of State Richard Bartlett presented him with a map of New Hampshire. After expressing his sincere gratitude, Lafayette continued on his journey, but not without stopping at the home of William A. Kent who had hosted a luncheon for him during his previous visit to Concord.

Lafayette next stopped in Hopkinton, where he attended a reception at Wiggin Tavern. In Warner he was welcomed by Dr. Moses Long Jr., whose father had fought in the American Revolution. A procession escorted Lafayette to Captain Kelley’s Tavern and then to the town green, where he enjoyed refreshments with the townspeople. Lafayette later stopped at Raymond Tavern in Bradford, which was located on what is now Lafayette Square.

He was met by an impressive procession at Sunapee which escorted him to Newport. He stopped at the home of Col. William Cheney, a politician, industrialist, and state militia officer. Here he was greeted by a group of his fellow veterans of the American Revolution, and later was entertained at the home of businessman James Breck.

In many of the places Lafayette visited on his 1824-1825 farewell tour of America the citizenry erected triumphal arches in his honor. Newport did not disappoint, as the locals there had built fine arches over the village bridge and in front of the Cheney and Breck houses.

Lafayette’s presence and his kind and dignified demeanor made a lasting impression in Newport. As historian Edmund Wheeler wrote in his 1879 “History of Newport,” “Bright eyes and waving handkerchiefs greeted him from every window as he passed… As he left, all hearts followed him with benedictions.”

Lafayette traveled on, arriving in Claremont at 9:30 p.m. The town was brilliantly lit, and a large crowd cheered as he arrived. He stayed overnight at the Tremont House, and at 6 a.m. continued northward. He stopped briefly at Cooke Tavern on what is now Route 12A. At around 7 a.m. Lafayette’s barouche crossed the bridge spanning the Connecticut River at Cornish. Arriving in Windsor, Vt., he began the next leg of his journey.

Next week: The end of Lafayette’s farewell tour, and an interview with Alan R. Hoffman, translator of Levasseur’s “Lafayette in America.”