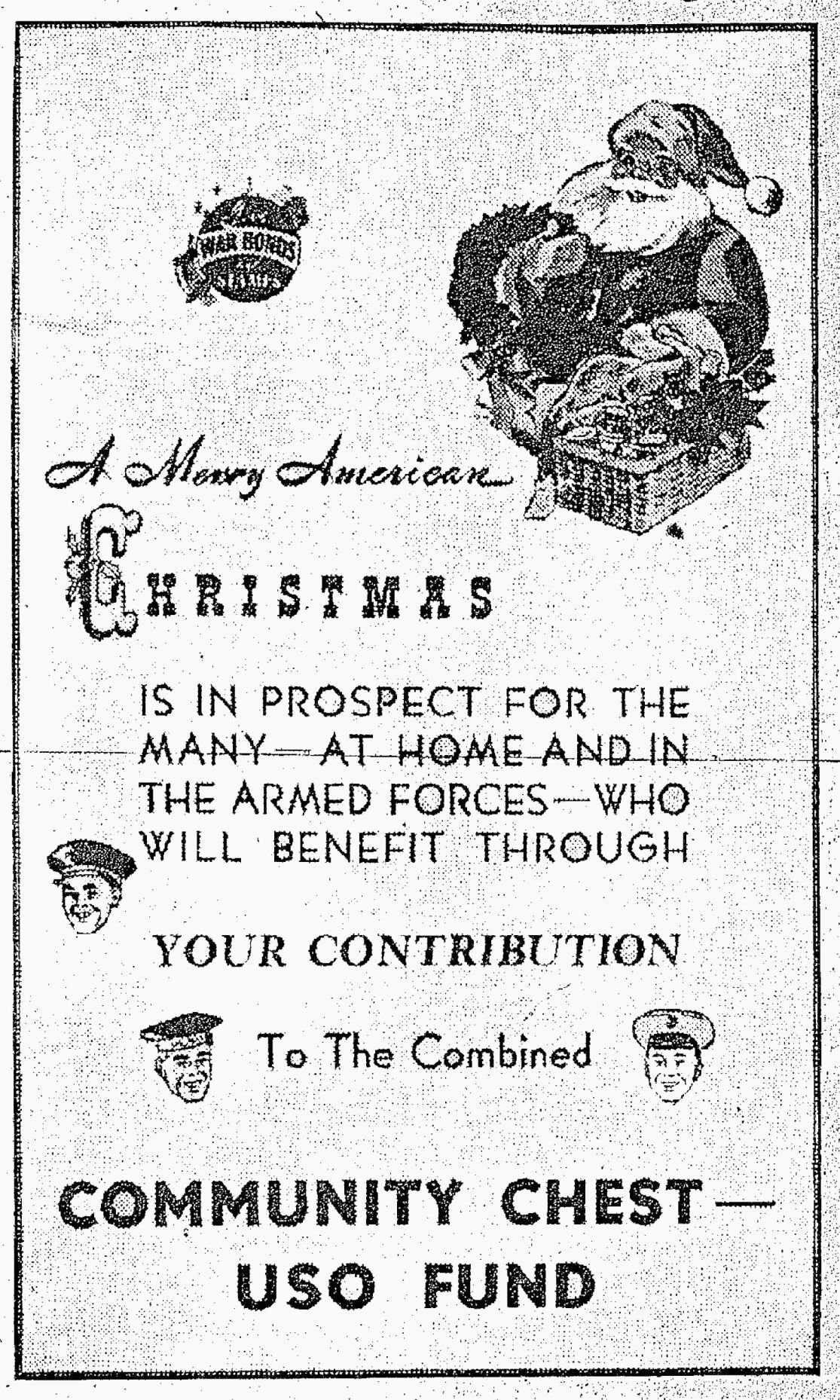 An ad from Dec. 21, 1942 edition of The Leader newspaper in Manchester recognizing the donors to the Community Chest-USO Fund.

In 1942 many towns and cities in New Hampshire enthusiastically participated in the national “war fund campaign” to raise money for the USO (United Service Organizations). This civilian charitable organization, founded in early 1941, supported members of the U.S. military as well as defense workers. The USO began providing programs in Manchester, New Hampshire in the fall of 1941.

In Manchester the USO fund drive was combined with the annual Community Chest campaign, Thanks to the work of 450 volunteers, this joint effort brought in more than $100,000 from individuals, companies, and organizations in the community. The members of the Manchester Police Department donated an amount that averaged more than a day’s pay per employee; the officers at Grenier Field made a $300 contribution; and 1,500 students from four Roman Catholic schools each gave a penny. In addition to the national USO, 18 local nonprofit organizations benefited from the donations.

In 1942 the USO programs in Manchester included both the USO Club (known as the USO Men’s Center) in the downtown and the USO Women’s Center on Myrtle Street (which will be explored in future columns). Many of the volunteers at these clubs found their lives greatly enriched. One of these was the late Dorothy Fisher Gilmore who grew up in the city’s north end. Her father, Herbert R. Fisher, was the Music Supervisor for the Manchester Public Schools.

Dorothy began volunteering with the USO in 1942, when she was 17. Her brother, Herbert Fisher, Jr. was serving in the U.S. Naval Reserve. Her mother Louise volunteered as a senior USO hostess, where her job was to chaperone the young junior hostesses and soldiers. Louise was able to keep an eye on Dorothy, who was among the youngest of the club’s volunteers.

In 2006, in an oral history interview for the Manchester Historic Association, Dorothy explained her role as a junior hostess, “...being a partner [to the GIs] if they want to play pool, or table tennis...listen to them talk, look at pictures of their girlfriends, or if they’re married—their wives, their children... A few of them would ask me to go to a movie or something, but I never got involved with more than just friendship. But you were basically...to make life easier between the army and the fact that...some of them had just left home for the first time...It was more or less like being a buddy, that’s the way I looked at, and that’s the way I treated it.”

Dorothy had a lovely singing voice, and was often asked to perform. She recalled, “We had a small room [at the USO Club], and there was some writing desks in there, and there’d be some soldiers with some of the junior hostesses hanging around, and there would be someone writing a letter and others would be just listening, and my girlfriend would play the piano, and I would just sing a few of the songs, you know, just to entertain...I remember doing that every Sunday afternoon. It wasn’t a performance really, it was sort of, well, like if you were in your living room...”

Like other junior hostesses, Dorothy also served as a dance partner for the GIs at the frequent dances held at the USO Club. She recalled, “But, boy did I love the ‘Jitter-Bug.’ I was a good dancer. Some of those soldiers were terrific dancers! I had one guy swirl me around that whole armory! I was so out of breath that I thought I was going to have a heart attack.”

One memorable winter night Dorothy and several other junior hostesses were stranded at the USO Club after a dance when a blizzard made travel impossible. As she recalled, “...so we all slept on the floor, and on the couches and in the chairs...One soldier went up on the second floor...and he brought down a few pillows and blankets and stuff and it snowed all night, and it wasn’t until about ten o’clock the next morning that we were able to leave the armory...my mother, she was in an evening gown, we get out of the taxi and go in the house at 10:30 the next morning. But that was real exciting. I thought that was wild.”

Next Week: Dorothy Fisher Gilmore sings with the USO orchestra.