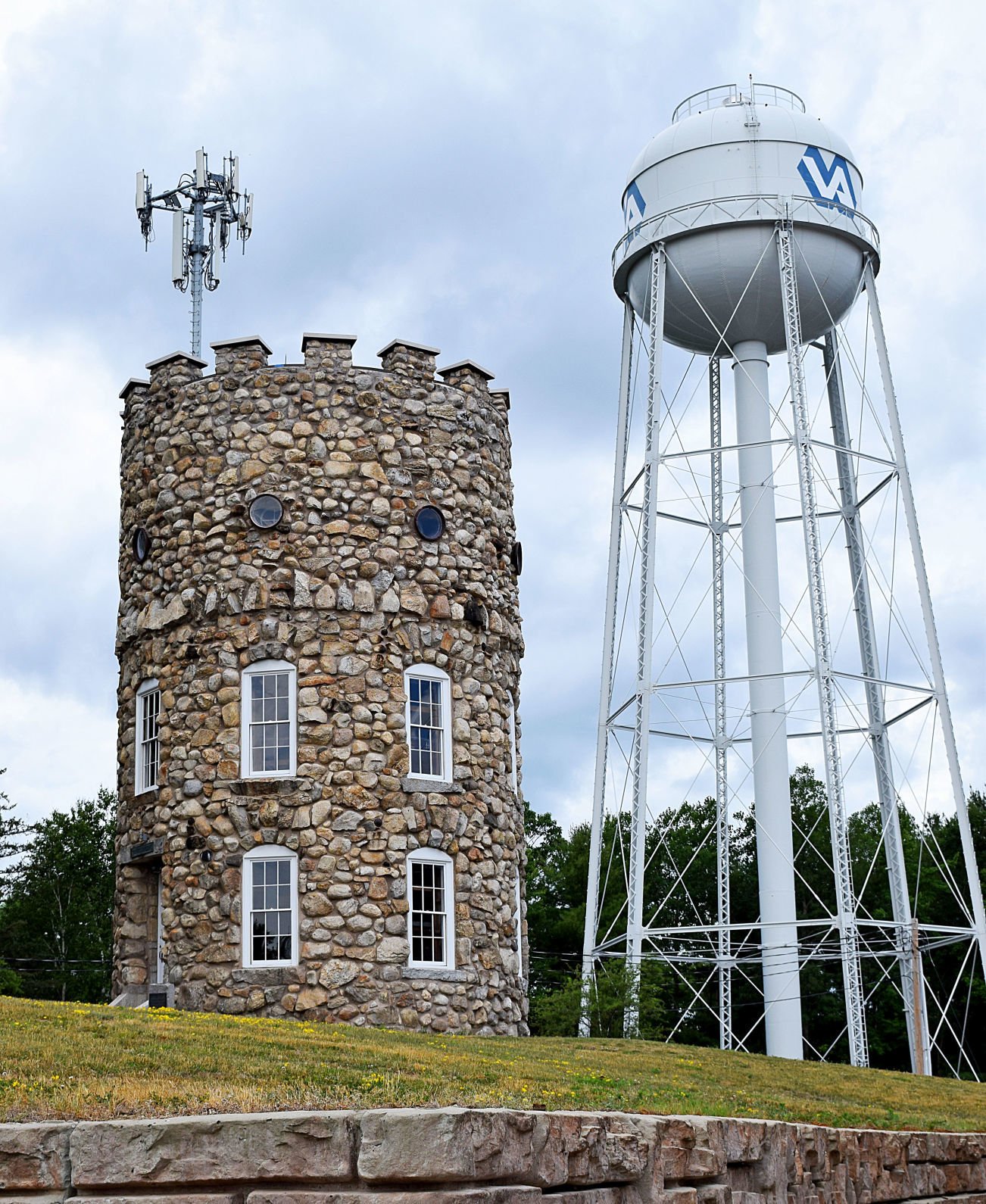 The Smyth Tower at the VA Medical Center in Manchester, constructed in 1888, is listed on the National Register of Historic Places.

ONCE MANCHESTER WAS approved in March of 1945 as the location for a new Veterans Administration hospital, the complicated process began that would lead to the completion of the facility in 1950. At the top of the agenda was the need to acquire 30 acres of land to accommodate the hospital, support structures, access roads, and parking lots — and that would allow for future growth. The site recommended by the Manchester citizens’ committee, on an elevated area off Smyth Road, was agreed upon. It contained mostly open space and woodlands, and was far enough away from the industrial area of the city to escape the air pollution from the factories.

Key to establishing the future construction site was the acquisition of 11 acres that had once been owned by Frederick Smyth (1819-1899), a four-term mayor of Manchester, and two-term governor of New Hampshire (1865-1867). Smyth had purchased this and additional acreage near Smyth Road as a young man, but had never built a house on the property. He preferred to live in the downtown area in his fine mansion on the east side of the Merrimack River overlooking Amoskeag Falls. In 1888 Smyth decided to build a lookout tower on his Smyth Road property patterned after ancient towers he had admired in England and Scotland. His 40-foot tall fieldstone tower has a parapet at the top, and walls that are 2 feet thick. It has a basement and three floors of space within the 24-foot diameter interior.

From November 1938 to June 1939 the Works Progress Administration, a Depression-era federal agency, made repairs and improvements to the tower. Marion Hamilton Cossar Smyth, Governor Smyth’s widow, donated the tower to the City of Manchester. The tower was soon being used by the Manchester Radio Club, a group of amateur (“ham”) radio operators. The groomed land around it functioned as a public space known as Smyth Tower Park.

During World War II Smyth Tower was occupied by the Civil Defense System of Manchester. After Mrs. Smyth’s death in 1946, the Smyth estate donated the land to the VA for the hospital construction project. The VA also acquired the tower from the city. It would be used as office space by the U.S. Army Corps of Engineers which would oversee the hospital project.

It was fitting that the Smyth property would serve veterans of the U.S. armed forces. During the Civil War Smyth had helped care for wounded soldiers after the Battle of Gettysburg in 1863 and the Battle of the Wilderness in 1864. When the New Hampshire army regiments returned to Concord in 1865, Smyth met with each of them to personally convey his appreciation. During the war the federal government had erected the Webster Hospital, a temporary facility for wounded soldiers located in the north end of Manchester. Smyth persuaded the U.S. Surgeon General to keep the hospital open for several months after the war ended so that the men staying there could continue with their rehabilitation. Also, Smyth was one of the first members of the board of managers of the National Home for Disabled Volunteer Soldiers, established in 1865.

Frederick Smyth’s legacy of support for soldiers and veterans is likely to have been on the minds of the Smyth family members when the decision was made to donate the property. However, the importance of his story to the local community was apparently lost to the VA, at least at first. In 1978 the local VA leadership, in recognition of the historical importance of Smyth Tower, applied for the structure to be listed on the National Register of Historic Places. According to the application, “After completion of the hospital, the plans called for demolition of the tower and the leveling of the ground around it. The crane was already in position to batter down the landmark with the steel ball when several friends of Governor Smyth’s widow, accompanied by her attorney, arrived on the scene to request the Engineer-in-Charge to spare the tower for sentimental reasons. The Boston office of the Veterans Administration, and the Washington Office, were contacted — all in the same afternoon. The decision was made to spare the tower and it still stands today.”

Next week: More land is acquired and the project begins.