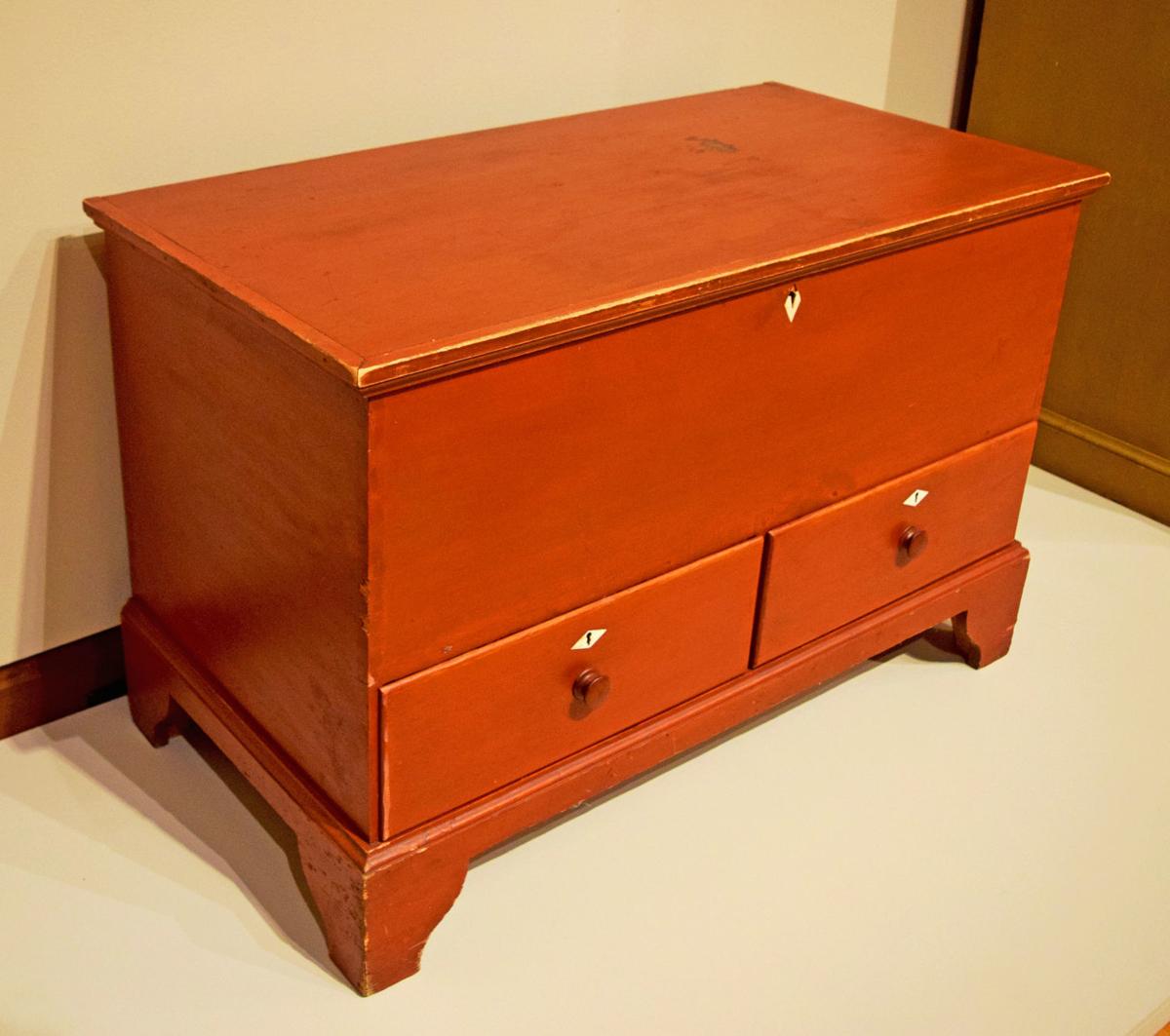 Pine and maple blanket box made by the Shakers of Enfield, New Hampshire c. 1840. in the collection of Canterbury Shaker Village, as displayed in the exhibition “The Shakers in the Modern World” in the Currier Museum of Art, November 2019.

Before heading off to war in the fall of 1861, Thomas Wier of Enfield delivered his two minor daughters into the care of the local Shakers. Caleb needed a place for 11-year-old Sarah and 9-year-old Ellen to live. His wife Mahala was gravely ill, and she appeared to be on the verge of death. One of the oldest recruits in the Fifth New Hampshire Regiment, Thomas had enlisted for a three-year term. He worried that he would not survive and his daughters would be orphaned.

Mahala did not die, but recovered her health. After Thomas was discharged from the army in May 1862 due to illness, he and Mahala attempted to bring their daughters home. But the Shakers, under the leadership of their chief administrator, Caleb Dyer, would not rescind the indenture contracts that Thomas had signed. According to the agreements, Caleb was Sarah’s and Ellen’s legal guardian until they turned 21. The indenture of minor children, who were orphaned or otherwise in need of care due to family circumstances, was a commonplace arrangement for the Shakers.

For more than a year the Wiers did everything they could to bring their daughters home, but no amount of pleading worked, and an attempt to kidnap the girls failed. Thomas arranged for lawyers to visit Caleb to try to change his mind, but their efforts proved futile. As a trustee of the Shaker community, Caleb had been tasked with carrying out the rules of the Shaker community for over 40 years, so he certainly felt confident in his legal and moral standing.

Adding difficulty to the situation was the fact that Thomas was suffering from a mental breakdown, which was likely the result of his war experiences. His neighbors in Enfield noticed that he was plagued by sudden and extreme mood swings and that he exhibited strange behavior. In his strolls around town he would laugh and sing uncontrollably. He wore his woolen army uniform and heavy coat and carried his military blanket even on hot summer days, and would march around carrying a hoe.

What was also obvious to his neighbors was that Thomas was drinking too much, and that he was becoming increasingly obsessed with Caleb Dyer. He told neighbors that he had agreed for his daughters to live with the Shakers only temporarily, and that Caleb Dyer had altered the indenture papers. As Thomas grew more agitated, he began threatening to kill Caleb, and to blow up the Shakers’ Great Stone Dwelling (then known as the Church Family Dwelling House). This impressive building was one of Caleb’s greatest achievements. Caleb was warned of these threats, but no one believed that Thomas was capable of violence.

Late on the afternoon of Saturday, July 18, 1863, Thomas Wier approached the Shaker village on foot. He greeted three Shaker men who were chatting by the side of the road and told him that he admired their gardens. Thomas found Caleb Dyer in the village and asked to see his daughters Sarah and Ellen. It was Caleb’s job to approve or disapprove of any visits by non-Shakers to residents of the community. Caleb refused to allow the visit, telling Thomas that it was too late in the day. Thomas then pulled out a Colt revolver and shot Caleb, as newspapers would later report, “through the body,” and ran off.

As Caleb stumbled toward the trustees’ office, several Shakers who had witnessed the shooting came to his aid. Before collapsing, Caleb cried out, “I am shot, but not killed!” He was carried to the infirmary, and the Shakers summoned Dr. Benjamin Skinner from town. Once he examined Caleb, the doctor became so alarmed that he telegraphed the nearby towns of Lebanon and Hanover asking that two more doctors be sent. The ministry leaders of the Enfield Shakers, who were visiting with their peers at the Canterbury Shaker community, received a telegraph message summoning them back immediately.

The surgeons removed the bullet, and for a time it appeared that Caleb would recover. His fellow Shakers tended to him lovingly, but he took a turn for the worse. On the morning of Tuesday, July 21, 1863, Elder Caleb Marshall Dyer died. He was 63 years old.

Next week: The complicated fate of the murderer, Thomas Wier.