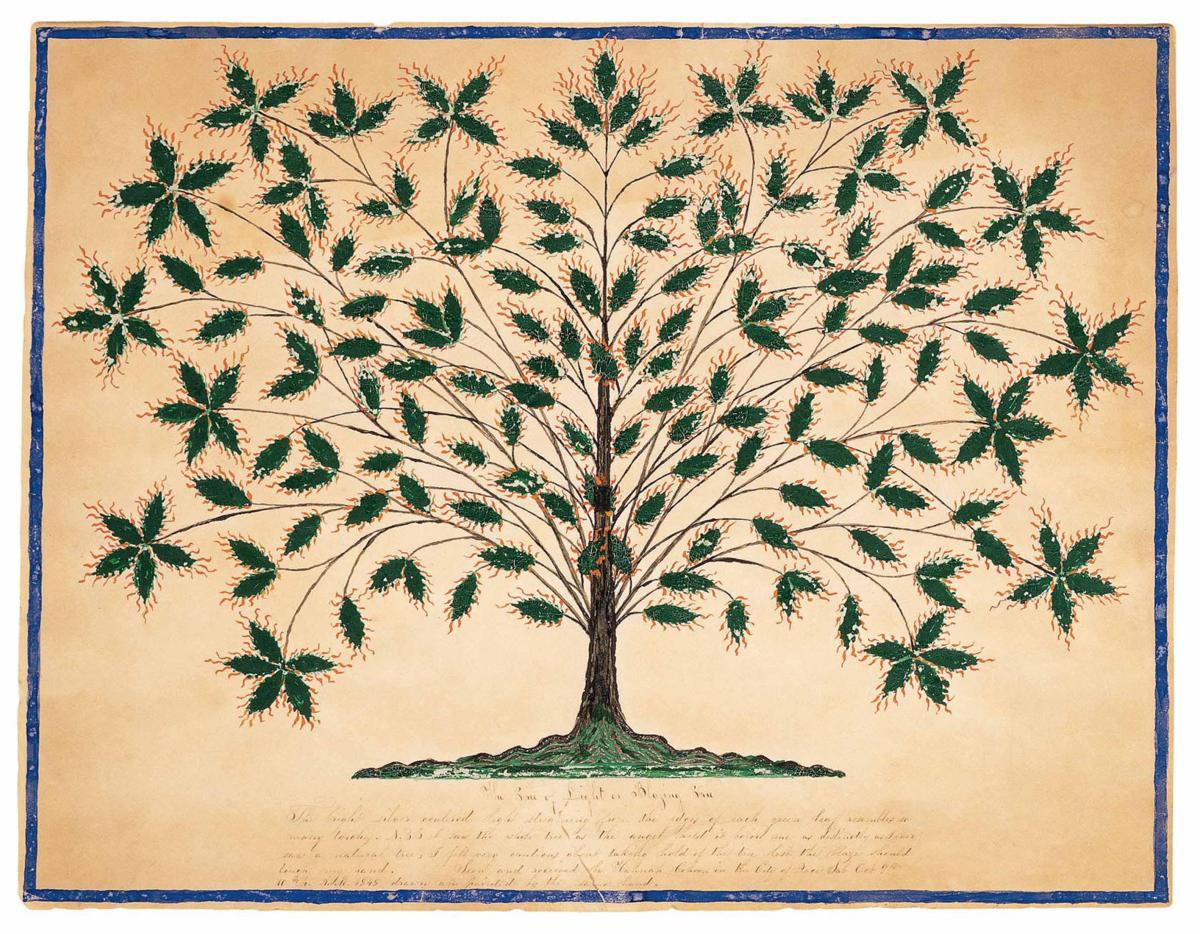 The Tree of Light, a drawing by Hannah Cohoon of the Shaker village at Hancock, Massachusetts, 1845, in the collection of the American Folk Art Museum, New York.

In late November and early December 1848 four petitions were delivered to the New Hampshire Legislature, signed by a total of 498 citizens. The petitioners were seeking to impose certain legal obligations upon the United Society of Believers in Christ’s Second Appearing, a Protestant sect known as the Shakers. At this time the number of men, women, and children living in New Hampshire’s two Shaker villages was about the same as the number of petitioners. This population was divided about equally between the Shaker village at Enfield and its sister community in Canterbury.

The signatures on the petitions included those of former Shakers and people who had been raised as children by the Shakers. The signers also included Protestant ministers who, no doubt, had theological objections to the Shakers, and a variety of anti-Shaker activists who had their own reasons for opposing the sect. Notable in this second category was author and speaker Mary Marshall (formerly Mary Dyer) whose conflict with the Shakers stretched back to 1815 when she had left the sect at Enfield. Now, at the age of 68, Mary continued to grieve the loss of her five children, who had been raised by the Shakers through a legal arrangement that she could never break. Her grief had led to bitterness, which had not diminished over time.

One of the petitions, which was signed by 410 people, begins, “Represent the undersigned citizens of the State of New Hampshire, that there are now existing among the Society called ‘Shakers’ in this State many gross and inconsistent practices subversive of the public good and which requires the interference of your honorable body ...” The petitioners requested that the Legislature pass laws to prevent the Shakers from indenturing minor children, as they believed that many of them were badly treated — and to protect women and children who had effectively been abandoned when their husbands or fathers had joined the sect. They asked that the Shakers be required to allow their members’ friends to visit them when they were ill, and also that the Shakers must publish death notices in newspapers of members who had passed away. Also, as worded in this same petition, the signers wanted “the passage of a further law providing in some way for the remuneration of those who may leave … for their labor and for the property they have invested ...”

The petitions were taken up by the Judiciary Committee of the Legislature. The committee’s examination took place in the New Hampshire State House over a three-week period in December 1848. A lineup of witnesses testified each night from 6:30 to 11 p.m. The petitioners were represented by attorney John S. Wells, while the Shakers were represented by a team of lawyers led by Franklin Pierce. Seventeen witnesses, including 12 Shaker apostates (people who had rejected the faith) testified against the Shakers.

Witnesses for the Shakers included David Parker, trustee of the Canterbury community, and Caleb Dyer, trustee of the Enfield community. Caleb was Mary Marshall’s 48-year-old son who had joined the Shakers with his family at age 12 in 1813. He had been named after Mary’s father, Caleb Marshall. Thirty-four additional witnesses testified for the Shakers, including 25 members of their two communities, as well as several non-Shaker medical doctors.

In addition to bringing up stories alleging harsh discipline of adults and children in the Shaker villages, and the forced breakup of family units, the petitioners also spoke about Shaker religious practices. From 1837 into the 1850s the Shakers, who had 22 settlements in eight northeastern and midwestern states, experienced what is known as the Era of Manifestations, or Mother Ann’s Work (after Mother Ann Lee, the founder of the Shakers). This was a time of spiritual revival and creativity for the Shakers, some of whom were inspired to produce “gifts” of mystical writings and drawings based on revelations. New songs, such as the familiar “Simple Gifts,” and new forms of ecstatic dancing were added to the worship services. Shaker religious meetings had been open to visitors from “the world” until 1842, when the decision was made to close them off from public scrutiny. But curiosity about Shaker practices naturally persisted, too often fueled by suspicion, mistrust, and fear.