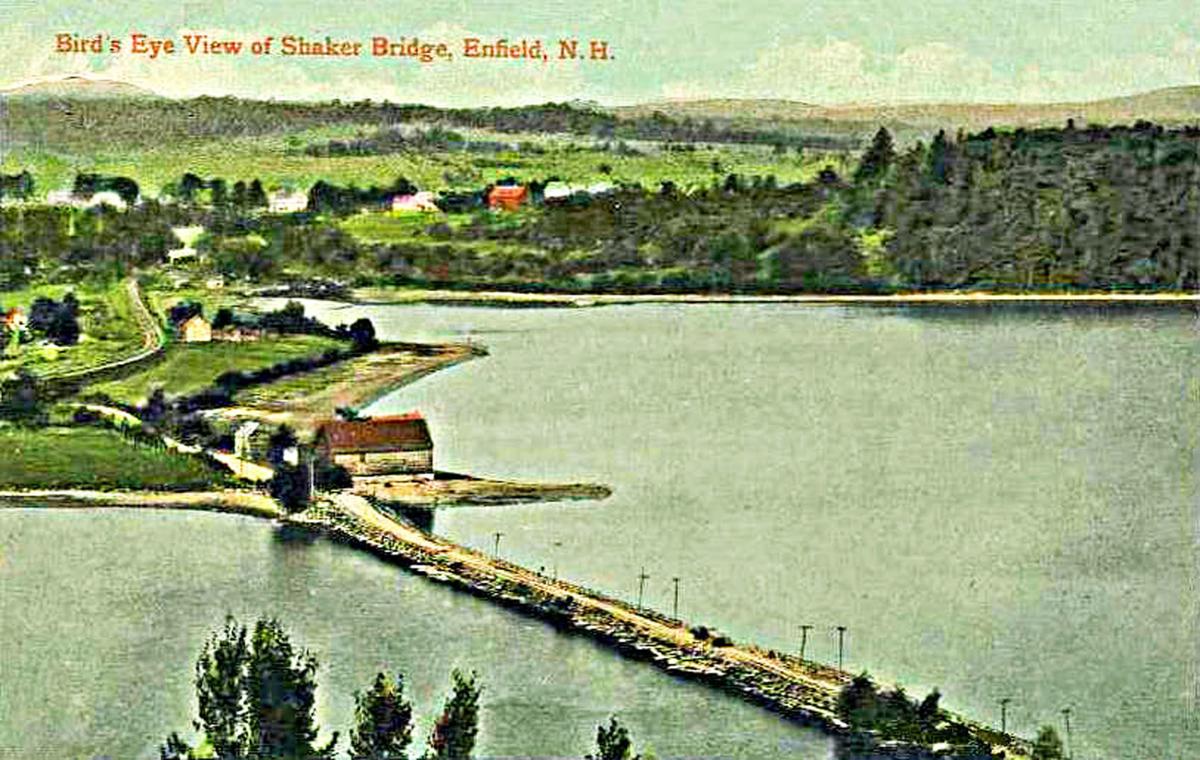 Early 20th century postcard of the Shaker Bridge across Mascoma Lake in Enfield, New Hampshire, built by the Shakers in 1848-1849.

By the late 1840s, after over a half-century of existence, the Shaker villages at Enfield and Canterbury, N.H. had grown into well-ordered, self-sufficient communities. Acceptance of the Shakers, a distinct religious sect, had grown over time, but a determined anti-Shaker movement persisted, made up individuals who harbored a sense of outrage at certain aspects of Shaker life and practice. In 1848 nearly 500 anti-Shakers petitioned the New Hampshire Legislature asking that laws be passed to limit the sect’s activities. That effort, like similar ones before it, ultimately failed.

One of the 1848 petitioners was 68-year-old Mary Marshall, whose struggles with the Shakers had thrust her onto the public stage for over 30 years. Mary had sought to incite public opinion against the Shakers through her lectures, sermons and books. A former Shaker novice, she had left the Enfield community in 1815. She was never able to gain custody of any of her five children who had remained at the Enfield village with her husband Joseph Dyer. Mary and Joseph were divorced in 1830.

Mary’s maternal ties with her children had been severed as a result of the Shaker practice of teaching children to forsake their biological family in favor of the Shaker communal family. In 1848 Joseph, age 75, was still a member of the Enfield Shakers, as were sons Caleb Marshall Dyer, age 48; Orville Dyer, age 44; and Jerrub Dyer, age 42. Two other Dyer children had died there of illness — Betsey in 1824 at age 22, and Joseph Dyer, Jr. in 1840 at age 31.

Caleb and Jerrub Dyer had been called as witnesses in the 1848 examination of the Shakers by a committee of the New Hampshire Legislature, which had been prompted by the anti-Shaker petitions. Jerrub Dyer, who served as physician to the Shakers, was questioned primarily about medical matters. Caleb Dyer’s testimony was of greater importance, as he was the lead trustee (similar to the general manager) of the Enfield Shaker community. He was responsible for major projects within the village, including the design and construction of the six-story Great Stone Dwelling, completed in 1841 — the largest housing structure built in a Shaker community.

In 1848-1849 Caleb oversaw the construction of a stone bridge across Mascoma Lake that would facilitate commerce between the town of Enfield and the Shaker village. The bridge remained in use until it was destroyed in a hurricane in 1938. It was replaced in 1940 with the current structure. Also, Caleb was instrumental in developing textile manufacturing as a means of income for his brethren.

At the legislative inquiry, Caleb delivered several key governance documents of the Enfield Shakers for review, and he answered questions about contractual and financial matters. No doubt the legislators’ view of the Shakers was softened when Caleb told them that 20% of the total tax income for the town of Enfield was paid by the Shakers.

When asked about his childhood, Caleb told the committee that it had been his mother’s idea to indenture the Dyer children to the Shakers. When Mary later learned of this testimony from reading a transcript, she disputed it, insisting that she had been tricked into signing the indenture papers that took away her parental rights. It surely must have stunned her to read Caleb’s testimony about an incident that took place in May 1818. His righteous defiance of his mother at age 18 remained fresh in his mind. He stated, “My mother came there at one time with fifteen of the neighbors, to try to get the children. We chatted together some little time, when she caught up the youngest child (nine-year-old Joseph, Jr.), and my sister (sixteen-year old Betsey) took it out of her arms, and I requested her to step out of the room and that would stop all trouble. When the child was carried out of the room, my mother tried to follow, but I did not choose to let her; she tried to follow, but I stopped her; I resisted her.”

In 1861 Caleb Dyer began dealing with a man named Thomas Wier, who had come to the Enfield Shakers for help with a difficult family situation. Through an unfortunate series of events, a tragic story would unfold.

Next week: The murder of Caleb Dyer.