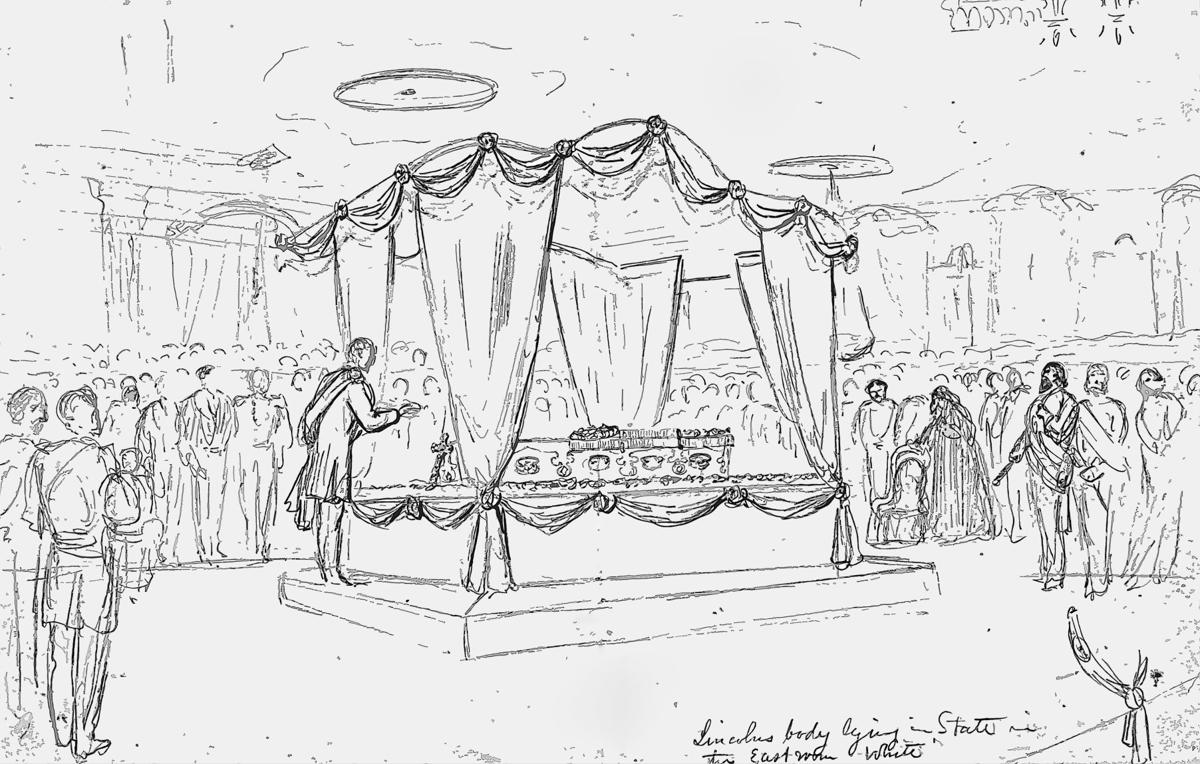 This sketch by artist Alfred R. Waud shows the funeral service for President Abraham Lincoln in the East Room of the White House on April 19, 1865.

At 8 p.m. on April 14, 1865, New Hampshire native Benjamin Brown French and his wife Mary Ellen arrived at their home in Washington, D.C., after a four-day excursion to Richmond, Va.

The Civil War was now over, and French, the Commissioner of Public Buildings for Washington, and a close aide to President Abraham Lincoln and his family, was happy to enjoy what he described as a “delightful” trip. The Frenches had been members of a “most pleasant party” of fellow government employees and elected officials and their wives who were eager to see the former capital city of the Confederacy.

The next morning French woke up at dawn, and about a half hour later looked out the window from the second floor. He noticed that the streetlights were still burning when they normally would have been extinguished, and he saw a sentry pacing back and forth in front of his house.

As he wrote in his journal later that day, “I thought something wrong had happened, so dressed and went down and opened the front door, and while standing in it a soldier came along and said, ‘Are not doings of last night dreadful?’ I asked what. He replied, ‘Have you not heard?’ I answered, of course, in the negative, when he proceeded to inform me that the President had been shot in Ford’s Theatre.”

French went immediately to the Capitol Building, and ordered it to be closed, and then made his way to 10th Street to the private home where President Abraham Lincoln lay in bed surrounded by his doctors, and members of his cabinet and other officials. French observed that Lincoln “was breathing very heavily, and I was told, and could myself see, that there was no hope for him.”

French left the President’s side and went into the room where Mrs. Lincoln and her 21-year-old son Robert were waiting, surrounded by ladies. As he wrote, “I took Mrs. Lincoln’s hand, and she made some exclamation indicating the deepest agony of mind. I also shook hands with Robert, who was crying audibly.” French sat with them for a few minutes, and then left to see where he could be of help. He was not present when Lincoln died at 7:22 a.m.

Later that morning French was at the White House where he began directing the funeral arrangements, and then he returned to the Capitol, where he ordered the great building to be clothed in mourning. On April 17, Lincoln’s body was lying in state in the East Room of the White House ahead of the public viewing scheduled for the next day. French was overcome with the urgency of his responsibilities, but paused for a few minutes so that he and his friend, Vermont Sen. Solomon Foot, could stand quietly together “at the side of the form of him whom, in life, we both loved so well.”

After the funeral service in the East Room on April 19, the coffin was carried in a solemn procession to the Capitol Rotunda, where a ceremonial burial service was performed. Lincoln’s body lay in state in the Rotunda on April 20, and on the next day the funeral train bearing the coffin left Washington. The train would stop at eight cities in Maryland, Pennsylvania, New York, Ohio, Indiana and Illinois where thousands of mourners lined up to view the coffin. President Abraham Lincoln was buried at Oak Hill Cemetery in Springfield, Ill., on May 4, 1865.

Mary Todd Lincoln left Washington on May 22, 1865. French wrote of the woman with whom he had had a challenging working relationship, “I went up and bade her good-by, and felt really very sad, although she has given me a world of trouble. I think the sudden and awful death of the President has somewhat unhinged her mind, for at times she has exhibited all the symptoms of madness. She is a most singular woman, and it is well for the nation that she is no longer in the White House. It is not proper that I should write down, even here, all I know! May God have her in his keeping, and make her a better woman. That is my sincere wish.”