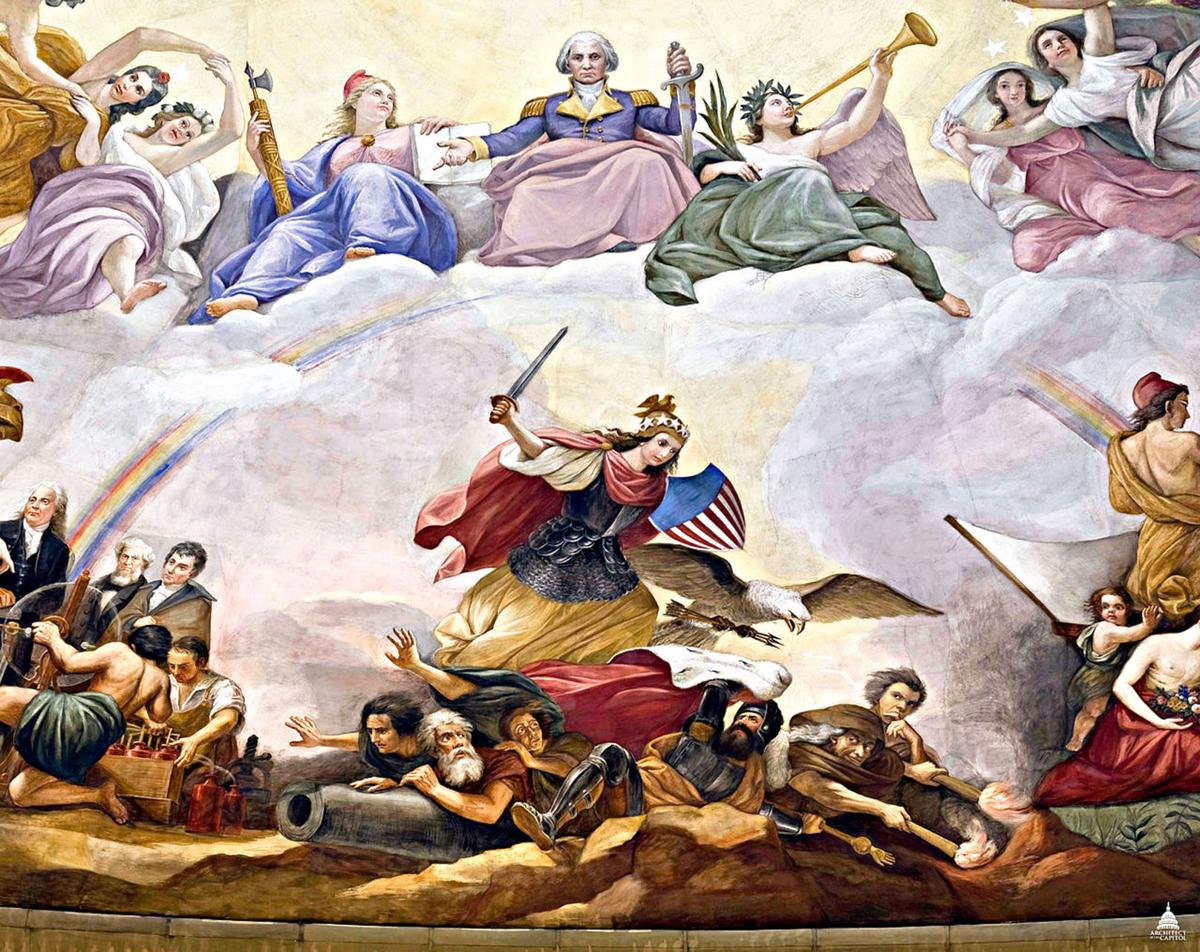 The section titled, “War” of “The Apotheosis of Washington” fresco in the Rotunda of the U.S. Capitol Building.

THE DEATH OF Abraham Lincoln on April 15, 1865, profoundly affected Benjamin Brown French, who had served Lincoln since September 1861 as the Commissioner of Public Buildings for Washington, D.C. French was much more than an efficient bureaucrat, as he was also a confidant of Lincoln’s, whom he recalled in his personal journal as “the good President, the best man I ever knew.” French had often been called upon by President and Mrs. Lincoln to assure that White House receptions proceeded smoothly and with proper decorum. In February 1862 he was trusted by the Lincoln family to organize the White House funeral for their young son Willie, and he also planned Lincoln’s solemn funeral in the mansion’s East Room.

New Hampshire native French, who had endured over three decades of political upheavals in Washington, now had to adjust to another major shift. President Lincoln’s Vice President, Andrew Johnson, was the country’s new chief executive. French was fortunate to have a cordial relationship with Johnson. The two men had known each other since 1843 when Johnson was a freshman congressman from Tennessee, and French was working as a clerk for the U.S. House of Representatives.

As the new first family was settling into the White House, French was enormously helpful to the President’s wife, Eliza McCardle Johnson, and his daughter, Martha Johnson Patterson. French wrote on July 14, 1865, “I was at the President’s yesterday and had a very pleasant interview of half-an-hour with Mrs. Johnson and Mrs. Patterson. I took their instructions to purchase several things for the house…” Many items had mysteriously vanished from the mansion after the Lincoln family had departed. French wrote, “I do not see how the house could have been stripped so completely of its furniture. I knew much had disappeared, but had no idea how much!” In the months that followed, Mrs. Patterson directed a renovation of the White House, working closely with French on the details.

French’s work as the Commissioner of Public Buildings became more difficult after Johnson appointed Iowa Sen. James Harlan as Secretary of the Interior. French now had to report to Harlan, whom he found to be more concerned with ferreting out suspected corruption than with getting things done. He wrote, “Mr. Harlan is an honest, upright, excellently well-meaning man, but not a man of enlarged views, or of a comprehensive mind … God never intended him for a member of the Cabinet of the President of the U.S.”

In addition to chafing under Harlan’s supervision, French was dissatisfied with his salary, and also, at age 65, was feeling the strain of the job. His role in the Johnson administration did bring some notable pleasures, however. As he had done in the Lincoln White House, French assisted at public receptions in the White House, with the particular duty of introducing the “presiding lady” to the guests. As Mrs. Johnson was in fragile health, this role was ably played by Mrs. Patterson, whom French greatly admired. After the Johnson’s first reception was held on Jan. 1, 1866, French wrote that she was “as nice a woman as ever lived, and one who will, I think, do all the duties of the place most admirably.” Mrs. Patterson was sometimes assisted by her sister Mary Johnson Stover, whom French also found to be a “plain, ladylike, republican.”

In January 1866, the project to build the great cast-iron dome over the Capitol Building, which begun in 1855, was finally completed under French’s oversight as the Commissioner of Public Buildings. The event that marked the completion of the dome’s construction was the removal of the scaffolding that was used by the artist Constantino Brumidi who painted the fresco entitled “The Apotheosis of Washington” which is visible through the oculus (circular opening) above the rotunda in the Capitol Building. Benjamin French was proud to have been the person who had contracted with Brumidi to create this grand work of patriotic art. The image, suspended 180 feet above the viewer, shows George Washington sitting gloriously in the clouds surrounded by mythological figures. French wrote in his journal, “…years hence (it) will be better appreciated than it is now, for it will grow upon those accustomed to look upon it…”

Next week: President Andrew Johnson is impeached, and Benjamin Brown French gets in trouble.

Aurore Eaton is a historian and writer in Manchester, contact her at auroreeaton@aol.com or a www.facebook.com/AuroreEatonWriter.