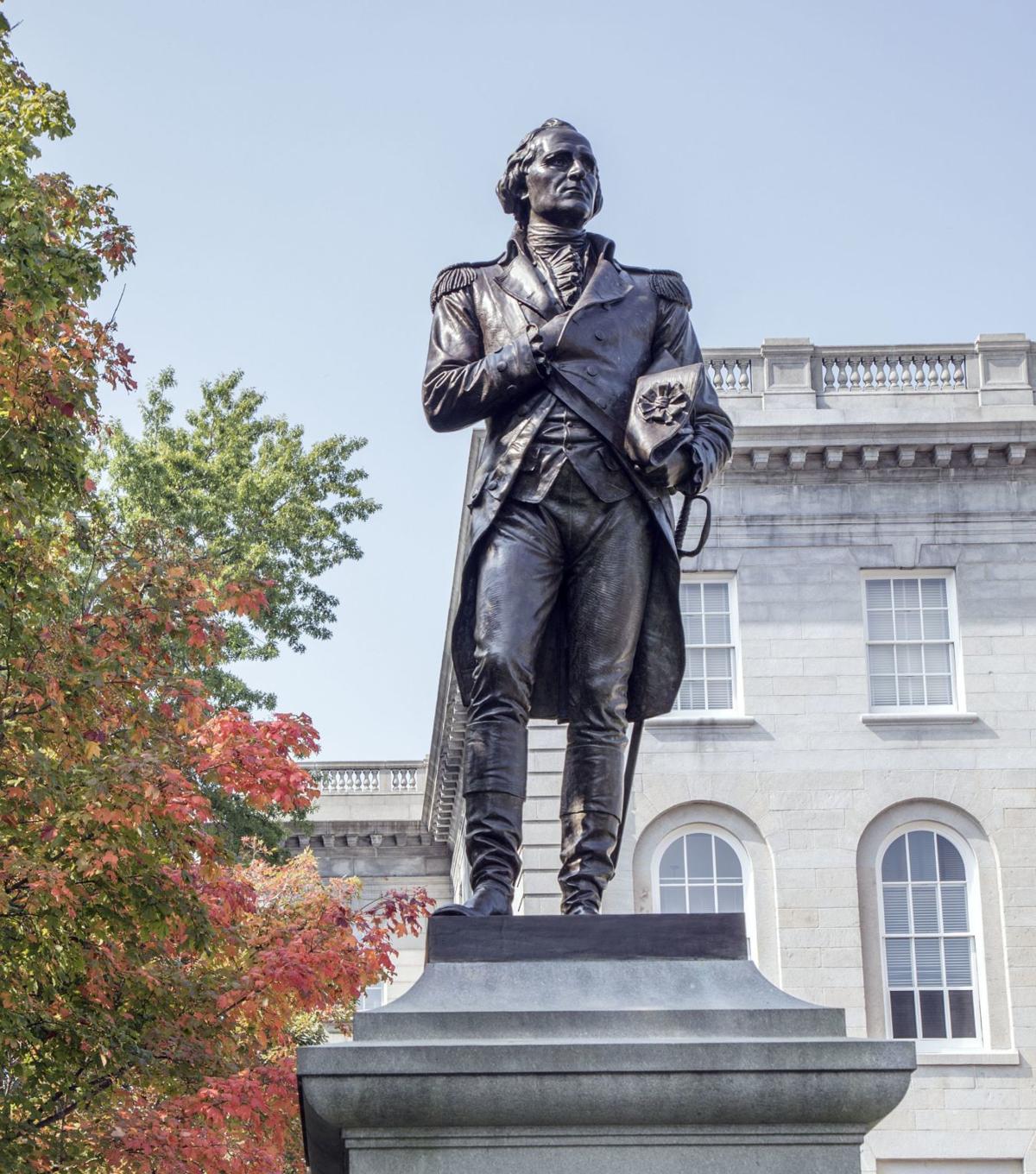 The memorial to Gen. John Stark, a hero of the French and Indian Wars and the American Revolution, was designed by architect John A. Fox. It was dedicated on the State House lawn in Concord on Oct. 23, 1890.

As he traveled through the United States during his emotional farewell tour in 1824-1825, the French aristocrat, the Marquis de Lafayette, preferred to be addressed simply as “General Lafayette.” Nearly every day of his marathon 13-month journey was filled with formal ceremonies and frenetic social activity, with little time allowed for rest. It was noted that this dignified gentleman, the last remaining Major General who had served under George Washington, treated every person he encountered with kind respect.

Lafayette returned to New Hampshire for his second visit to the state as part of the tour on Tuesday, June 21, 1825. After enjoying a sumptuous meal in Salem, Lafayette and his entourage traveled to what is now Derry (then part of Londonderry). Here Lafayette was entertained by a local landowner, and he visited the Adams Female Academy, a pioneering institution for the education of young women.

Lafayette and company then traveled the following route (using modern road names): northwesterly by Route 28 Bypass to the intersection with U.S. Route 3 in Hooksett and proceeding along Pleasant Street in Hooksett to where it continues as Main Street in Allenstown. Crossing over the Suncook River into Suncook Village (which is comprised of parts of Allenstown and Pembroke), Lafayette stopped at the mansion of Caleb Stark. The Stark family had roots in Derryfield (now Manchester) and Dunbarton. Caleb Stark had relocated in 1811 to Suncook, where he owned and operated the first cotton textile mill in the village, the Pembroke Cotton Fabric Company.

On June 17, Stark had witnessed the laying of the foundation stone for the new Bunker Hill monument in Charlestown, Mass. He was among the veterans of the American Revolution invited to the ceremony, and Lafayette had been one of the dignitaries officiating. During the Battle of Bunker Hill on June 17, 1775, 15-year-old Caleb had fought alongside his father John Stark, the Colonel of the New Hampshire militia. Later in the war Caleb served as his father’s aide-de-camp for a time. By the end of the war John Stark had been promoted to the rank of Major General and young Caleb to Major.

Certainly, Lafayette would have enjoyed the opportunity to see John Stark again, but the old General had died in 1822 at the age of 93. Although they had never held commands during the same battle, the two men had interacted as trusted senior officers in Washington’s inner circle. They had shared the difficult task of serving as judges in the 1780 court martial of British Major John André, who had helped Benedict Arnold in his plot to surrender the fort at West Point, N.Y., to the British. The judgment did not come easily, as 30-year-old André was a likable person. He was found guilty of spying, and faced execution by hanging.

During that same day, June 21, 1825, Lafayette also stopped for a short time at Fisk’s Tavern, located a little further up the road from the Stark mansion in Pembroke. According to Stark family legend, Caleb Stark hosted Lafayette at his home in Suncook for the night. The next morning a committee of state legislators met Lafayette in Pembroke (possibly at the tavern) to escort him and his companions to Concord, the state capital.

The chairman of the committee was State Senator Ezekiel Webster, the elder brother of the statesman Daniel Webster, who had delivered the eloquent speech at the Bunker Hill ceremony. Ezekiel Webster greeted the revered guest as follows: “General Lafayette — The committee of both Branches of the Legislature of the State of New Hampshire now appear before you; and on behalf of the Government and Citizens, tender their high respect and consideration and bid you a cordial welcome to the bosom of the State.”

Webster continued with warm words of praise for Lafayette’s contributions to “… our common country, during her revolutionary struggle,” and stated “We do not expect to vie in that etiquette and style with which you have been received in the populous and political cities of our country; we attempt it not. But we tender to you, hearts as warm, and homage as sincere.”

Lafayette boarded his carriage and was conducted to Concord where preparations were under way for his arrival.

Next week: Concord welcomes General Lafayette with all the fanfare it can muster.