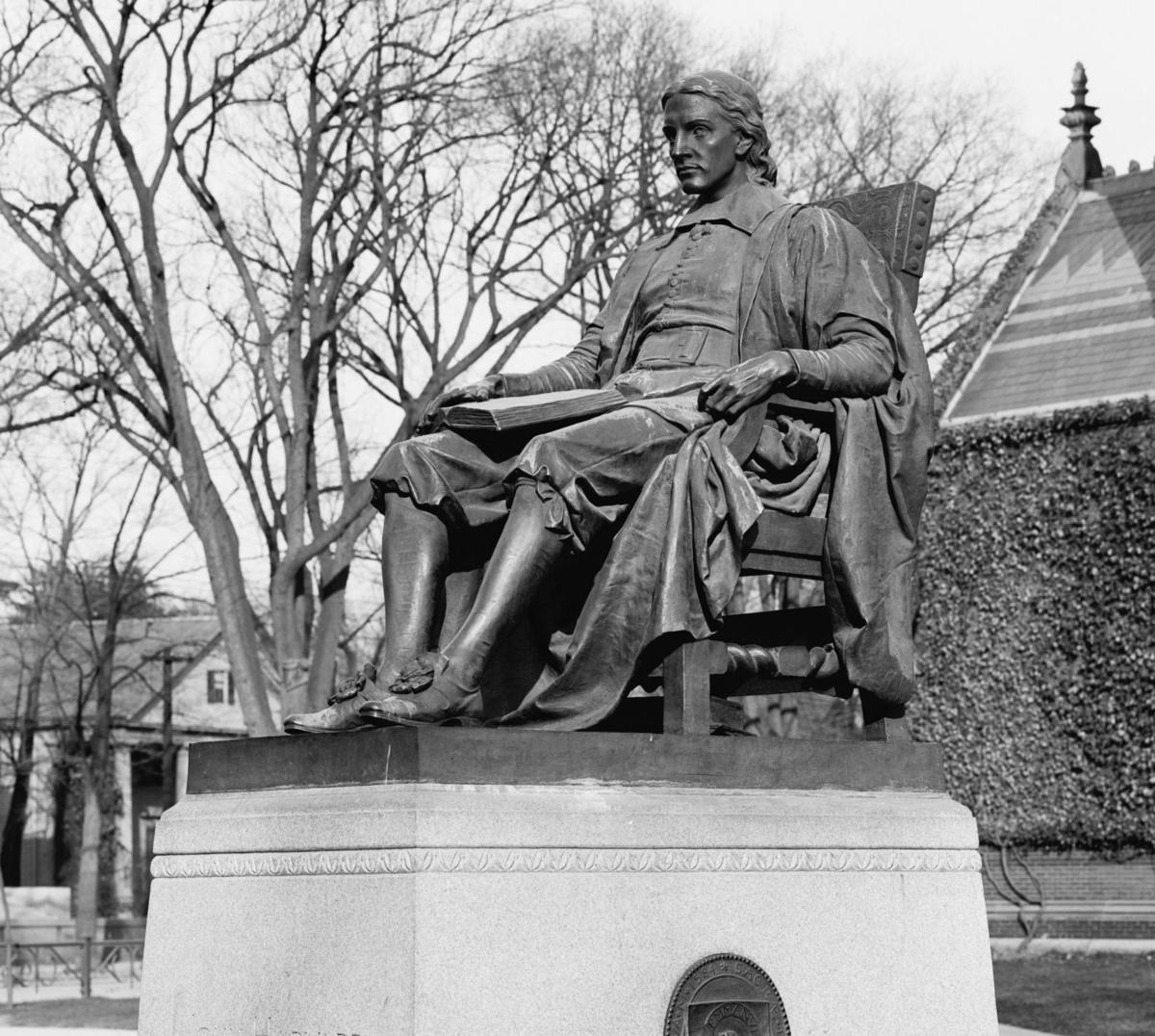 The statue of the Rev. John Harvard in its original location in front of Memorial Hall at Harvard University, circa 1904.

SINCE ITS UNVEILING in April 1875, Daniel Chester French’s Minute Man statue in Concord, Mass., has remained an enduring symbol of the patriotic citizen soldier. The monument depicts a young New England farmer in 1775 with one hand on his plow and the other holding his musket. He stands forever ready to fight for freedom from oppression.

The National Guard is the direct successor to the provincial militia companies of the colonial era. On July 10, 2019, a bronze statue inspired by the original Minute Man was unveiled at the entrance to the National Guard base at the Pease International Tradeport in Newington. It honors the members of the 157th Air Refueling Wing of the New Hampshire Air National Guard stationed there.

French would create another iconic sculpture tied to Massachusetts history, and this one also would become a popular tourist attraction. In 1883 a wealthy Bostonian and graduate of Harvard University, Samuel J. Bridge, commissioned French to produce a bronze statue of the Rev. John Harvard. The school in Cambridge, Mass., had been named after Harvard, who was a learned minister living in Charlestown, Mass. Harvard became the first large donor to the “New College” in Cambridge when he bequeathed half of his sizable estate and his 400-volume library to the school upon his death in 1638. The school’s name was changed to Harvard College in 1639 in his honor, and in 1780 it became Harvard University.

The sculptor faced two great challenges. First, the donor gave him only a year to complete the work, and second, no one had ever found a picture of Harvard. French had to try to capture the essence of the man through his imagination. Always a thorough researcher, French read everything he could find on the life of Harvard, and also researched the clothing worn by the ministers of the era.

At first French wasn’t sure if the subject should be standing or seated, but he finally settled on depicting him sitting in a chair with an open book in his lap. A Harvard Law School student, Sherman Hoar, modeled for the statue’s head, but French did not create an exact likeness of his face. Later in life Hoar would serve as a U.S. Congressman representing Massachusetts, and as a U.S. District Attorney.

The statue of Harvard was installed in a grassy area in front of Memorial Hall, a stately High Victorian Gothic building near Harvard Yard on the school’s campus. The building, completed in 1877 and housing a theater and meeting hall, commemorates Harvard men who fought for the Union in the Civil War. The statue was dedicated on Oct. 15, 1884. It would be reinstalled in Harvard Yard in 1924, where it could be seen and appreciated by a greater number of students.

French was pleased that his naturalistic depiction of a thoughtful, scholarly Harvard received praise. But not everyone would look upon the statue with reverence. It is, after all, on a college campus. The inscription on the statue’s granite base reads “John Harvard — Founder — 1638.”

So the monument became known as the “statue of three lies” because it is not a depiction of Harvard, he was not the school’s founder (it was established by the Massachusetts Bay Colony), and the college was created in 1636, not 1638. Today the statue is a favorite landmark in Cambridge, and students and visitors alike rub the toe of Harvard’s left foot for luck.

For several years, French had worked in Boston and in New York City, and he occasionally used his old studio in Concord, Mass. After his father, Henry Flagg French, a native of Chester, N.H., died in 1885, French spent several months in Europe with his stepmother, Pamela French. Much of their time abroad was enjoyed in Paris where French took art classes, interacted with other artists and visited the Louvre and other museums.

After returning to the U.S., he decided to settle in Manhattan, and by 1888 he was established in a new studio space. There he crafted a masterpiece, the Thomas Hopkins Gallaudet and Alice Cogswell statue for Gallaudet University, a school for the deaf in Washington, D.C.

Next week: The Gallaudet University statue, marriage and Chesterwood.