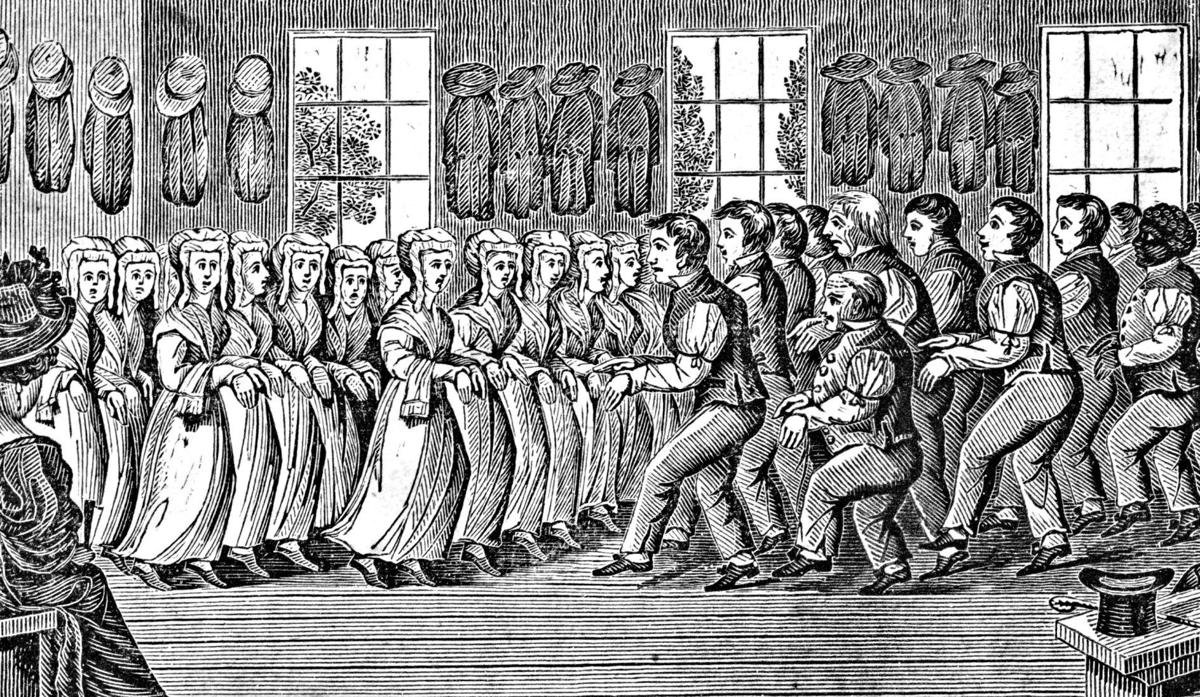 A circa 1830 illustration depicts a typical Shaker worship meeting, which included dancing and singing.

During their missionary tour of 1781-1783 Mother Ann and the Shaker Elders remained within the borders of Connecticut and Massachusetts, but word of their unusual religious sect spread into New Hampshire. In 1781 some citizens of Canterbury and surrounding towns learned about the Shakers from Benjamin Thompson, an itinerant peddler.

While passing through the area, Thompson shared what he knew about the Shakers to congregants of Canterbury’s Free Will Baptist Church. The members of this evangelical church had a more expansive view of God’s grace than the one held by the traditional Protestant churches. Some were intrigued by the Shakers, who believed that salvation was available to anyone who sought it and who led a pure life.

In the following months, a few people from Canterbury traveled 160 miles to the Shaker settlement at Niskayuna near Albany, N.Y., as they wished to meet Mother Ann. According to the 1816 Shaker publication “Testimonies of the Life, Character, Revelations, and Doctrines of Mother Ann Lee and the Elders with Her,” during his visit John Wadleigh of Canterbury asked Mother Ann how he should settle his worldly affairs. She advised him to “Go and confess your sins to your father, and hold your testimony, and own the gospel of Christ wherever you go; and that will be your strength and protection.”

Wadleigh’s fellow townsman, Jonathan Lougee, visited Niskayuna more than once, and when he was there in the spring of 1784 Mother Ann scolded him for not coming more often. She said, “The people in your parts are wealthy, but covetous. You ought to hate your covetousness and your lusts, and forsake them, and be joyful and cheerful, and take up your crosses and serve God.” Both of these men became members of the new Shaker community in Canterbury, where they found the spiritual home they had been seeking.

Whitcher became a central figure in the development of the Canterbury settlement. He had been born in Stratham in 1750. In 1774 his father bought him a large tract of undeveloped land in the eastern section of Canterbury. Whitcher cleared the land, built a house and barn, and began farming. He moved his wife and baby daughter to the property in 1775.

In 1782 the new Shaker Believers began gathering at Clough’s farmhouse, and after a few months, Whitcher’s farm became the center of a nascent Shaker community. For around 10 years the Believers met at Whitcher’s home on Sundays or at Morrill’s home in Loudon, and some of the converts began living communally on the Whitcher property. According to the 1914 Canterbury town history, “With generous enthusiasm (Whitcher) opened his doors to the faithful, and his home soon became their rallying point in Canterbury.”

In 1787 the Shakers began organizing their communities into formal societies where the members would live celibate and devout lives, and work and worship peacefully together. The first Shaker group to do this was the New Lebanon Society in New York (which was renamed the Mount Lebanon Society in 1861). Niskayuna was also formalized at the same time, and the two New York communities began working in partnership as a “bishopric.”

New Lebanon served as the headquarters for the Shaker movement where important decisions that affected the development of Shakerism were made.

Clough, who had moved there from Canterbury, became one of New Lebanon’s leading Elders. On Feb. 10, 1792, the Canterbury Shaker Society was formalized. At the time, there were 43 adult Believers living on Whitcher’s property, which he donated to the organization.

In 1792, in addition to the New Lebanon, Niskayuna and Canterbury societies, there were established Shaker settlements in Hancock, Harvard and Tyringham, Mass., and in Enfield, Conn.

Next week: A Shaker settlement is founded in Enfield, N.H.