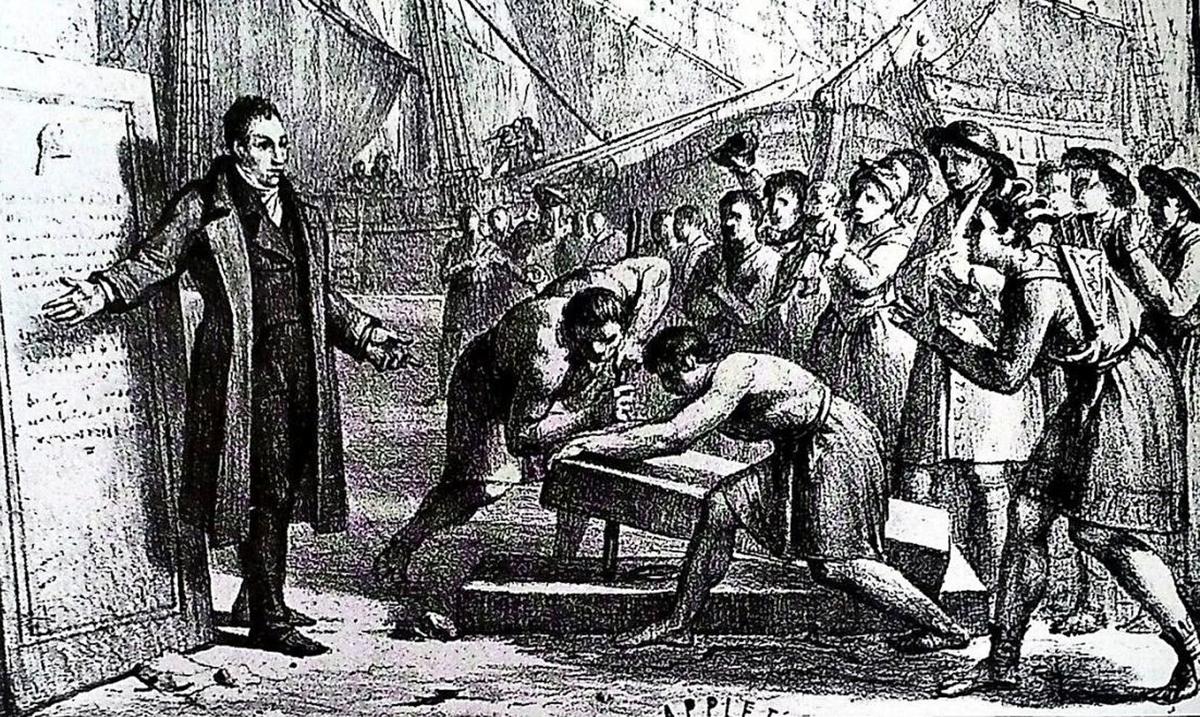 The Marquis de Lafayette spent only about 12 hours in Portsmouth on Sept. 1, 1824, but the city made the most of it. The “nation’s guest” was surrounded by cheering crowds, praised by local and state officials, taken on a tour of the Portsmouth Naval Shipyard, honored at a public banquet, and admired by the ladies at a great ball. This brief but eventful visit ended at midnight when Lafayette and his entourage headed south to Boston by carriage. From there he would continue his whirlwind tour of the United States which had begun in mid-August 1824.

As the last remaining major general who had served under George Washington during the American Revolution, Lafayette was a living link to the epic struggle that had given birth to the United States of America. Wherever he traveled during his 1824-1825 journey he was met with a tremendous outpouring of affection and gratitude. On Sept. 2, 1824 Lafayette visited the places where the Revolution had begun on April 19, 1775 — Lexington and Concord, Mass. — where he was warmly received.

The next day he rode westward through Worcester County, where, according to a Boston newspaper, “… he was welcomed with extensive processions and cavalcades, splendid parades, and salutes of artillery, (and) affectionate greetings…which much impeded his progress, but which notwithstanding his fatigue, he cheerfully and impartially accepted … in one particular all united — Men, Women and Children all, all appeared to bring their hearts in their hands.”

In the months that followed, Lafayette traveled to Yorktown, Va., to commemorate the 43rd anniversary of the American victory at the Siege of Yorktown, in which he had participated. He visited George Washington’s tomb at Mount Vernon, Va., and met with his friend Thomas Jefferson at Monticello, his plantation near Charlottesville, Va. He spent time in Washington, D.C. socializing with the nation’s top leaders, including President James Monroe, and he visited Gen. Andrew Jackson at his home in Nashville, Tenn.

On June 17, 1825 Lafayette was in Charlestown, Mass., across the Charles River from Boston, to mark the 50th anniversary of the Battle of Bunker Hill. As a Freemason and hero of the Revolution, he was given the honor of participating in the elaborate Masonic ceremony conducted for the laying of the foundation stone for the Bunker Hill Monument. As Lafayette’s secretary Auguste Levasseur wrote in his journal, Lafayette and the other dignitaries “put medals, pieces of money, and a silver plate bearing the program of the dedication of the monument into an iron box; this box was laid under the stone on which the Grand Master scattered corn, wine, and oil …” The chief orator for the occasion was New Hampshire native Daniel Webster, then a U.S. Congressman from Massachusetts.

Lafayette was able to enjoy a quiet visit with 90-year-old John Adams before leaving Boston on June 21. One of Lafayette’s escorts was an aide to Massachusetts Gov. Levi Lincoln, Jr. — 22-year old Josiah Quincy, IV, the son of Boston’s Mayor, Josiah Quincy, III. When the group reached the town of Methuen, it was time to say farewell as a delegation of New Hampshire officials would be taking over hosting duties in Salem, N.H., on the other side of the state border.

As Quincy recalled in his memoir, “To me his last words were: ‘Remember, we must meet again in France!’ and, so saying, he kissed me on both cheeks. ‘If Lafayette had kissed me,’ said an enthusiastic lady of my acquaintance, ‘depend on it, I would never have washed my face as long as I lived!’”

In Salem, Lafayette and his party were entertained at Pattee’s Tavern, located about a mile from the border. According to the 1875 “History of Salem, N.H.” by Edgar Gilbert, “A turkey dinner was provided and no pains were spared to give him a handsome welcome. The story has it that the refreshments poured were of such high quality that many of the party were in the best of humor before their departure.”

Over the next seven days Lafayette would make his way as rapidly as was possible by horse carriage over dirt roads, stopping in several New Hampshire towns, with a side trip into Maine, before heading into Vermont.

Next week: The Marquis de Lafayette arrives in Derry, N.H.

Aurore Eaton is a historian and writer in Manchester, contact her at auroreeaton@aol.com or atwww.facebook.com/AuroreEatonWriter