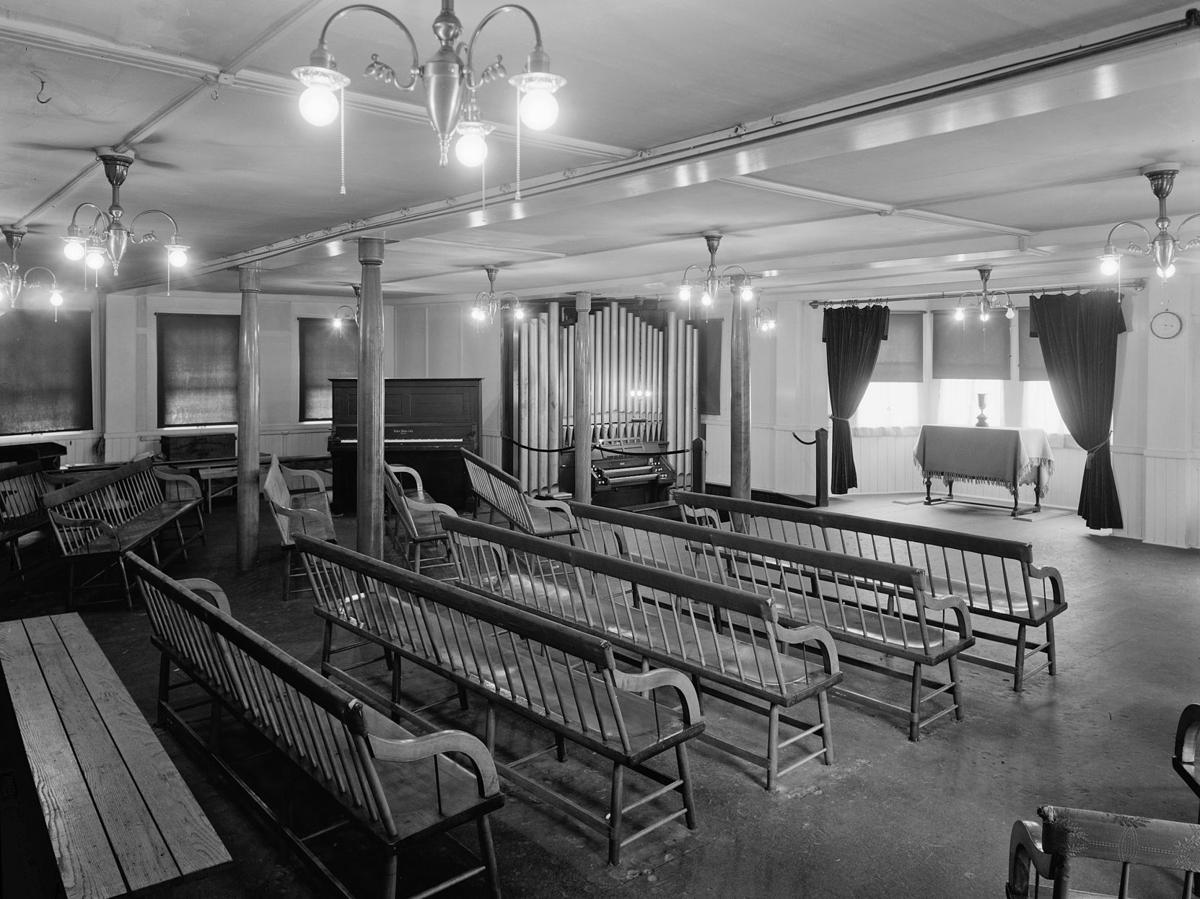 The meeting room in the Church Family Dwelling at the Canterbury Shaker community, photographed in 1976.

For three weeks in December 1848 the Judiciary Committee of the New Hampshire Legislature heard testimony regarding the practices of the New Hampshire Shakers. The hearings were held in response to petitions signed by 498 people who wanted strict laws passed to end alleged abusive activities taking place in the Shaker communities at Enfield and Canterbury. The committee’s review proceeded much like a court trial, with attorney John S. Wells acting on behalf of the petitioners, essentially as the prosecutor. The Shakers, as the defendants, were represented by a team of lawyers led by the prominent political and military figure, Franklin Pierce.

The committee’s first hearing was held on Dec. 13, 1848. It began with an opening statement from Wells, which was reported in an 1849 book that provided a public record of the proceedings of the committee. According to Wells, the witnesses “would exhibit ... the wrecks of domestic happiness caused by this religious Society; the abandonment of wives and children, who had been deprived of their natural guardians and protectors, and thrown upon the cold charities of the world.”

Indeed, the witnesses, most of whom had formerly lived in one or both of the Shaker villages, did tell sad stories of families that could never be put back together again once they became part of the Shaker world. Theresa Willard, whose family had joined the Canterbury Shakers when she was 6 years old said, “I was commanded to disregard all natural affection; to have no more regard for my mother, brothers, and sisters, than for anyone else ...” Former Shaker Hiram Clifford stated, “Was told not to have any natural affection for my wife and children; must stifle it. Had a wife and six children, when I went there; I never saw my children alone after I went there.” The Clifford family had joined the Shakers at Canterbury when Hiram was 31 years old. He spent one year there and 11 at Enfield before leaving the sect. After a few months he returned to the Enfield community, but when the Shakers would not allow him to speak with his wife, he left again, this time for good.

In addition to eliciting these highly emotional accounts, Wells’ questioning also focused on matters of property and finances including issues regarding the transferring of private assets to the Shakers after joining the sect. Also, several witnesses who had left the Shakers complained of the lack of meaningful compensation provided to them in exchange for their years of unpaid work. James Partridge had lived with the Shakers from the age of 12 until age 22. He said, “When I left them, they paid me ten dollars, which was one dollar a year for the time I stayed there.”

The witnesses explained that the Shakers sought to establish and maintained conformity in beliefs and behavior among the brethren. They spoke about how the Shaker Elders demanded complete obedience from the rank and file, and that nothing they said or did could be questioned on penalty of losing one’s soul. One man, who had grown up among the Shakers, told of older members gathering the children together to read newspaper stories to them of murders, shipwrecks, and other terrible accidents in order to frighten them about the dangers of the outside world. Another witness spoke about how the children were “never allowed any pastimes, sports, or any childlike amusements; no social amusements, any more than to run in the door yard, a few moments, for exercise. Children were always kept to work ...” Several witnesses told about the harsh physical discipline they had endured as children, and that they had seen others endure, including beatings and whippings.

The cross-examination of the witnesses was handled by Franklin Pierce, along with his associates, attorneys Ira Perley and Josiah Quincy. The attorneys did not appear interested in disputing the specific statements as presented, but instead they seemed to be aiming at bringing out at least a few positive opinions about Shaker life. One example was when witness Theresa Willard answered a question from Pierce by saying, “(I) was always well-treated myself, was always taught to tell the truth there; truthfulness was inculcated on all occasions in the Society.”

Next week: The Shakers’ side of the story.