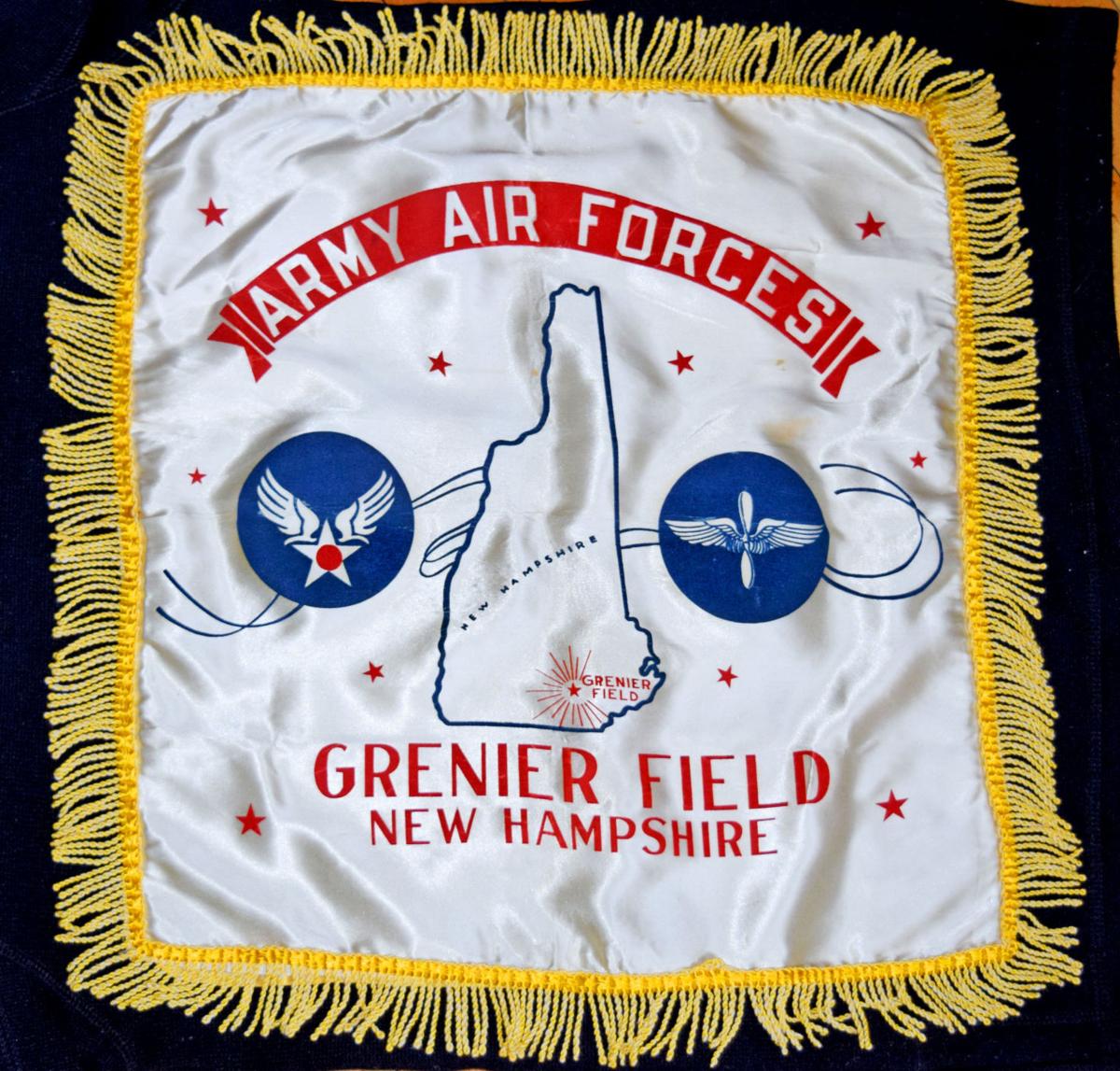 A “sweetheart” or “mother” satin pillow cover from Grenier Field in World War II. This was typical of the gift items sold at the base that servicemen would send home to loved ones as souvenirs.

During World War II, Grenier Field in Manchester was an important link in the chain of military airfields in the eastern United States that supported the Allied war effort in Europe. After Germany was defeated in May 1945, Grenier Field remained busy as it processed hundreds of returning war planes, and as the base hospital cared for injured airmen on their way home.

In 1946, with the war now ended, Grenier Field and other stateside bases reduced their operations. With the downsizing of the military, the USO (United Services Organization), a national charity that supported military and civilian morale during the war, also scaled down. It would be disbanded in 1947. The USO that we know today began in 1950 when the organization was reconstituted to serve the troops during the Korean War.

The first USO club to shut down in Manchester was the Women’s Center (known as the Myrtle Street Center). Headquartered in a grand Victorian-era mansion, the club was a beloved institution that engaged many women, families, and servicemen in fun and meaningful activities. It had started operating in January 1941.

The Oct. 2, 1945 edition of the Manchester Leader newspaper included an article outlining the club’s busy schedule of the prior week, which included a children’s cooking class; a dance for military veterans; and a social for the Victory Belles, the club’s dedicated volunteers. That same day the newspaper announced that the Women’s Center would be closing, implying that this would happen immediately. However, its director, Miss Dorothy Corrigan, was able to keep some of its social activities going into December when the club was finally closed.

The USO Club for Service Men (known as the Downtown USO) ceased operating on July 1, 1946. Headquartered in the Old Armory Building at 60 Pleasant St., the club was one of the largest and best equipped of the USO facilities in New England. During World War II it hosted a variety of programs, but was perhaps most famous for the many dances held in its large hall, which often featured the big band music that was so popular in the 1940s.

It was estimated that, over the 4½ years of its existence, the Downtown USO served nearly half a million people. These included GIs from Grenier Field, local servicemen (and women) on leave, and veterans. Hundreds of local volunteers were engaged in the club’s operations, including prominent civic leaders who served on various committees and a large corps of women who served as senior and junior hostesses.

The club’s final event was a special “Recognition Night” party held on June 27, 1946. It featured a concert by the NH State Guard band that included semi-classical and light “pop” tunes. The estimated 500 guests were seated at tables where they were served refreshments, in the manner of a Boston Pops concert. In a touching ceremony, the USO volunteers present were awarded certificates inscribed “in recognition of distinguished service to the nation through United Service Organizations.”

In his final report, the Downtown USO’s Executive Director, Irwin W. Davis, wrote that the most significant contribution of the club to the city of Manchester was its effect on the local volunteers, “It has made them community conscious, given them an enrichment of social living and has given them an opportunity to serve others.” Regarding the GIs served by the club, he stated, “We have noted a feeling of forlornness on the part of the servicemen who have really made this club a ‘home away from home.’ These men have been wondering where they will go in order to find the wholesome recreation and hospitality that was always found at the USO.”

The closing of the Downtown USO ended two programs associated with the club. These were the USO activities organized by the Jewish Welfare Board for the Jewish troops at Grenier Field, and the special club for Black soldiers at the base organized by a USO staffer working with the Army’s morale officer.

The cordiality and respect that were the hallmarks of the USO programs in Manchester brought cheer and encouragement to so many people—both military and civilian—who needed a reason to smile during the dark days of World War II.

Next week: Transient airmen at Grenier Field and a Polish connection.