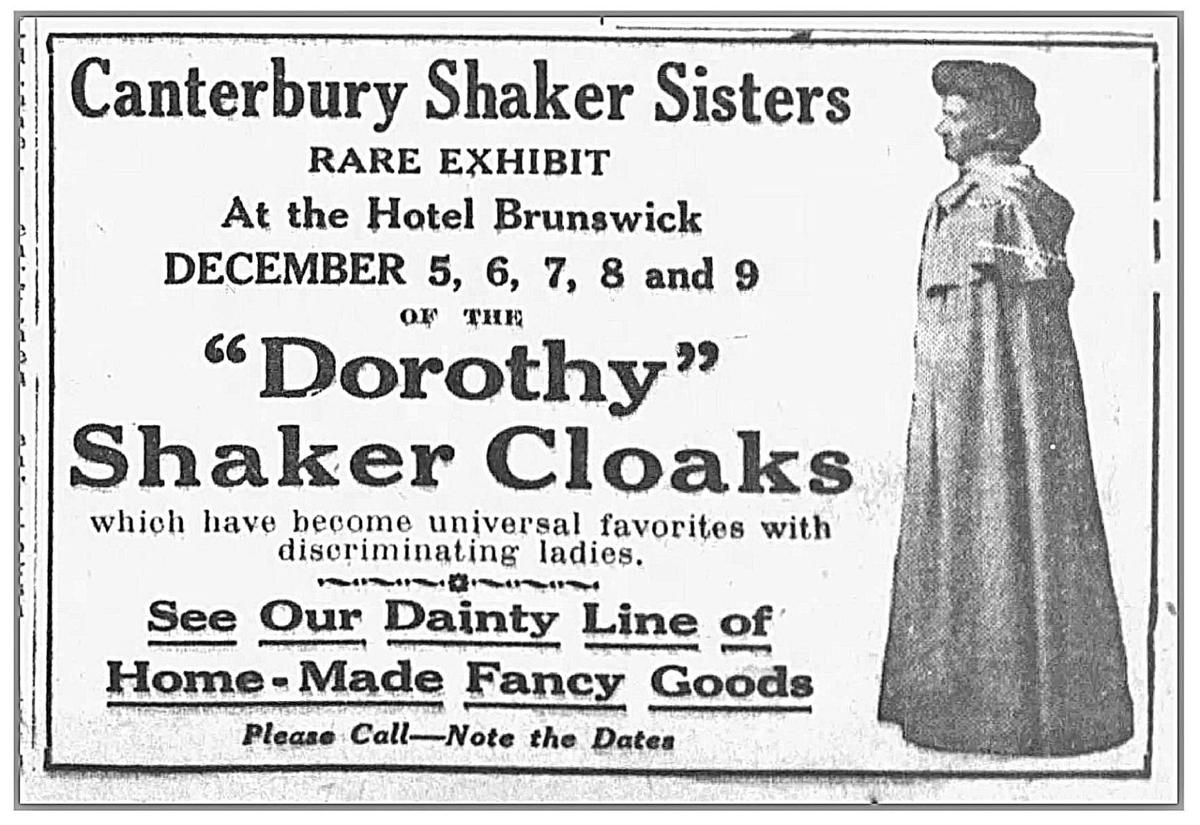 An advertisement in the Dec. 3, 1916, edition of The Boston Globe newspaper promoting an exhibit of “Dorothy” Shaker Cloaks and other Shaker products.

Carefully crafted, well-designed, inventive and useful — these were characteristics of the hand-made products produced for market by the New Hampshire Shakers. One of the most sought-after of their products was the Dorothy Cloak.

Designed around 1890 by Eldress Dorothy Durgin of the Canterbury Shakers, it was a simple, long and loose outer-garment with a hood. The cloak was fastened in front with hooks and eyes or with metal clasps, and tied at the neck with a wide silk ribbon. The formal version, lined with brightly-colored silk, was popular with upper-class ladies who enjoyed showing it off at the opera and on other social occasions. In 1893 Frances Cleveland wore a dove-gray Dorothy Cloak at the second inauguration of her husband, President Grover Cleveland.

The Dorothy Cloak was sold under the label of Hart and Shepard, named after two Canterbury Shaker Sisters, Emeline Hart and Lucy Ann Shepard. To provide the Shakers with some legal recourse against imitators, its design was trademarked in New Hampshire in 1901. Each year, several Canterbury Shaker Sisters would journey as far south as Florida with their travel trunks filled with Dorothy Cloaks and a supply of small, handmade “fancy work” gift items.

Their visit to Baltimore, Md., in December 1905 was advertised in a local newspaper: “An exhibition of the Dorothy or Shaker cloaks and holiday goods was held yesterday at the Hotel Stafford by the Shaker sisters. A large assortment of handsome cloaks was shown in all colors ... A sale of holiday goods was also held, including pincushions, workboxes, dusters and quaint little dolls dressed in the Shaker costume. This exhibition is held annually in Baltimore and the proceeds from here and other cities helps to support the community of the Shakers at East Canterbury, N.H. The exhibition will be concluded tomorrow.”

An ad promoting the Sisters’ display at the Hotel Brunswick in Boston in early December 1916 touted the “‘Dorothy’ Shaker Cloaks — which have become universal favorites with discriminating ladies,” and recommended seeing “... Our Dainty Line of Home-Made Fancy Goods.”

In 1840, the Shakers at Canterbury established a printing shop that would become the center of publishing for the greater Shaker world. For much of its existence its operations were supervised by Elder Henry Blinn (1824-1905). The shop produced religious materials for use among the Shakers in their various communities scattered throughout the eastern United States. The shop also published pamphlets about Shakerism that promoted an understanding of the sect among non-Shakers.

One of the shop’s most notable publications was “Mary Whitcher’s Shaker House-Keeper,” published in 1882. Sister Mary Whitcher (1815-1890) was the granddaughter of Benjamin Whitcher, a convert to Shakerism whose farm in the eastern section of Canterbury became the center of what would become the Canterbury Shaker village. Sister Mary was a genial person, generous in spirit, who particularly enjoyed welcoming non-Shaker visitors to the Canterbury settlement.

She stated in her introduction, “The Shakers recognize the fact that good food, properly cooked and well digested, is the basis of sound health. The following pages therefore are designed to contribute to that object, as far as possible, in the selection and preparation of receipts (recipes) which are known to be reliable and good and at the same time adapted to the majority of New England homes. ... While it is possible that but a small proportion of housekeepers will see fit to follow them exactly, it is, at the same time, hoped that they may suggest something beneficial to them in the preparation of many savory and economical dishes.”

Whitcher expressed that she sincerely hoped “that this unpretentious book may prove generally acceptable to those who love their homes.” The publication contained hearty recipes such as apple pudding, donuts, fish chowder, brown bread and steamed beef steak pudding.

To further introduce outsiders to Shaker ways, from 1883 to 1899 the Canterbury shop produced a monthly magazine, “The Shaker Manifesto.” According to the Shaker contributors, the publication was “devoted to the defense and advocacy of the tenets of (Shaker) belief, but contains much spicy and interesting reading. In each number appears one or more of their songs set to music … a few agricultural hints are inserted … for the Shakers have a reputation of being successful farmers.”

Next week: The Shaker legacy in New Hampshire—the museums at Enfield and Canterbury.